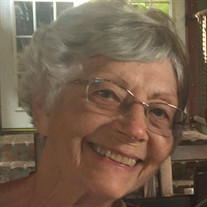 Yvonne “Vonnie” Marie Reyman was born on July 18, 1936 in Ainsworth, Nebraska to Marie A. Esterly and Wilson Marlatt. Vonnie passed away May 5, 2021 at the age of 84 in Lincoln, Nebraska. She was surrounded by her husband, Ret. U.S. Army Major Claude Lou Reyman and daughter, Ret. U.S. Army Colonel Lynda Marie Granfield. Claude and Vonnie had two children, a daughter, Lynda and an adopted son, Cory Reyman at the age of two, who passed away in 1992 at the age 21. Claude and Vonnie lived in Lincoln after their marriage in Ainsworth on July 24, 1960 and last year they celebrated their 60th wedding anniversary. Vonnie started work at the Ainsworth Telephone Company after high school and when she and Claude moved to Lincoln she continued to work at the Lincoln Telephone and Telegraph Company, starting as a telephone operator on skates, assistant supervisor and before her retirement was the chief of the service and repair department. She retired with nearly 39 ½ years of service in the telephone industry. Vonnie was very active with the Pioneer Association, where she later served as the president of the association. The Pioneer Association was very active in community and service, making braille and large print menus for many of the local restaurants in Lincoln. Vonnie served as a volunteer for many years with the election board and assisted voters during the voting process. Vonnie was a member of the Daughters of the Nile, Naphis Temple No. 66, and as a member of the PEO, as well as, a member of the American Legion Auxiliary Unit #202. Vonnie was preceded in death by her parents; her brother, Kenneth Marlatt; her son, Cory; and cousins, Vivien Johnson, Maxine, Carl, Ione and Neola Rauscher and longtime friend, Dean Honnen. Survivors include her husband Claude of Lincoln; daughter Lynda, son-in-law, Ret. U.S. Army Lieutenant Colonel Chris Granfield of St. Petersburg, Florida; sister-in-law, Donna L. Marlatt of Ainsworth; nephew, Tim and Kim Marlatt of Valentine, Nebraska and niece, Mary Ann Brown of Pensacola, Florida. She is also survived by longtime friends, Bob and Kathy Tyler and Beth Honnen along with numerous cousins, second cousins and many other lifelong telephone friends. Funeral Services were held on Tuesday, May 11, 2021 at the United Methodist Church in Ainsworth with Pastor David Randall officiating. Special Reflections/Eulogy was given by Lynda Granfield. The CD Selections by Alan Jackson were played: “How Great Thou Art,” “The Old Rugged Cross” and “Amazing Grace.” Casketbearers were: Chris Granfield, Tim Marlatt, Rick Marlatt, Danny Johnson and Brian Johnson. Honorary Casketbearers were: Bob and Kathy Tyler, Beth Honnen and Donna Lee Marlatt. Memorials were suggested to the family in Yvonne’s name for a future designation. Interment was in the Mt. Hope Cemetery at Wood Lake, Nebraska under the direction of the Hoch Funeral Home of Ainsworth.

The family of Yvonne M. (Marlatt) Reyman created this Life Tributes page to make it easy to share your memories.