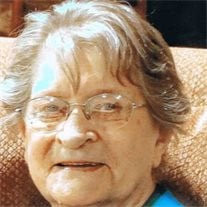 Wilma (Bunn) Peters was born in Johnstown, Nebraska, on April 25, 1931, to Joseph and Lillian (White) Bunn. On June 5, 2015, after a courageous battle with cancer, she passed away at the Brown County Hospital at the age of 84 years. Wilma spent her childhood in Johnstown, Nebraska; Fetterman, Wyoming; and Newell, South Dakota, where she graduated in 1948. She later married James L Peters and is survived by her three daughters: Sandra Devine (Francis), Peoria, Arizona; Constance Jackman (Jimmy), Johnstown, Nebraska; and Patricia Schipporeit (David), Norfolk, Nebraska. Jim's Air Force career led Wilma to many destinations throughout the United States, as well as to England and Morocco. Wilma always said, "I don't need to go anywhere because I did enough traveling when your Dad was in the military." This instilled deep patriotism within her. Wilma could often be seen wearing an American flag pin. Following her husband's death in 1963, Wilma permanently resided in Ainsworth, Nebraska, until the time of her death. Wilma's true vocation was motherhood, and she was the center of her family, as well as the hub for her extended family of brothers, sisters, nieces, and nephews. She was definitely the go-to get-it-done gal! Her children and grandchildren still feel her warm love in the afghans she made for each one of them. Her lasting legacies are her competitive spirit as well as her openness and her acceptance of everyone. She had a passion for being a participant rather than an observer. Her many trophies from bowling and horseshoes bear witness to the success of her competitiveness. Wilma introduced her children, grandchildren, and great grandchildren to many games including Yahtzee, marbles, Skipbo, pitch, rummy, Scrabble, and Dominoes. Whoever she was playing had to "up their game," because she never "LET" anyone win. Wilma was actively involved in the American Legion Auxiliary Post #79 where she held most offices and was a Gold Star Widow, VFW, Hospital Auxiliary where she was president several years, "Just friends" at the Congregational Church, and the Horseshoe Club. She was a proud woman from something as simple to mowing her lawn a specific way to her work ethic to her own independence. Wilma committed herself to life. The last three months of her life were spent at her beloved son-in-law Jimmy's and Connie's home where she was lovingly cared for by daughters Connie and Sandy. She looked forward to the weekend visits of her daughter Pat and her husband Dave. These last months she played games, worked puzzles, did daily word searches, listened to music, and watched Steve Harvey. Her daily highlight was her morning chat with Jimmy. She also loved the visits of her grandchildren, great grandchildren, nieces, and nephews. In addition to her daughters, Wilma is survived by eight grandchildren; seven great grandchildren; three sisters: twins Floretta (Ellen) Moore, Mapleton, Minnesota and Loretta (Isabelle) Lockman, Crawford, Nebraska; and Ruth Falk (Marvin), Delta, Colorado; one brother Dwight E. Bunn (Gwen), Lizella, Georgia; many loving nieces and nephews, and a host of wonderful neighbors and friends. Wilma was preceded in death by her parents; her husband; two sisters, Laura Seieroe and Nelda Whalen; brother James Bunn, and several nephews and nieces. Funeral Services were held on June 9, 2015 at the Congregational United Church of Christ with Pastor Neva Murphy officiating over the service. Music was provided by Drew Klatt with a special vocal selection sang of " In The Garden" sang by Connie Jackman and James Bunn. The Congregational Selection of "The Old Rugged Cross" was also provided. Pallbearers were, Aaron Jackman, Kyle Jackman, Conner Jackman, Gene Barber, Randy Johnson, and Kurt Starkey. Honorary pallbearer was Alana Jackman. Burial was held at the Ainsworth Cemetery under the direction of Hoch Funeral Home of Ainsworth. Memorials are suggested to the Ainsworth American Legion Auxiliary Post #79, the Sandhill's Cancer Fund Inc., the Wounded Warrior Project, or to the Donor's choice.

Wilma (Bunn) Peters was born in Johnstown, Nebraska, on April 25, 1931, to Joseph and Lillian (White) Bunn. On June 5, 2015, after a courageous battle with cancer, she passed away at the Brown County Hospital at the age of 84 years. Wilma... View Obituary & Service Information

The family of Mrs. Wilma J. (Bunn) Peters created this Life Tributes page to make it easy to share your memories.

Wilma (Bunn) Peters was born in Johnstown, Nebraska, on April...