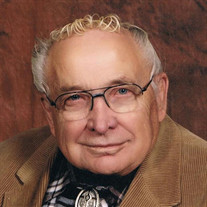 Willis Frank Miller was born May 11, 1931 on the family farm south of Chappell, Nebraska. He passed away November 28, 2019 at the Rock County Hospital Long Term Care at the age of 88 years, six months and 17 days. He was born to Frank and Charlotte A. (Bomeke) Miller. He was the youngest child and only son. He had three older sisters, Glenus Fern, Marion Arlene and Harriett Katheryn. Willis walked three miles one way as he started school. He attended school there for three years before the family moved south of Lodgepole, Nebraska and finished his grade school days. He started his high school in Lodgepole and mid-year, the family moved to Bayard, Nebraska where he finished and graduated in 1949. Willis was baptized on June 1, 1941, and was confirmed in the Zion Lutheran Church at Chappell where he rode his horse one way for 15 miles every Saturday to attend Confirmation. Later his family bought a farm near Chimney Rock with irrigation from Pathfinder Dam on the Platte River. He worked for neighboring farmers and the Great Western Sugar Factory at Bayard and the Riverside Box Factory at Sidney, Nebraska. On January 1, 1952, he enlisted in the U.S. Air Force with four years of active service and also four years of inactive service. He was a crew chief on a KB29 and helped to fly the first transatlantic fighter record from England to America. He was stationed in Iceland to refuel the jets. On June 28, 1953, he was married to Ellen Hope Thiede at Burton, Nebraska and they made their home in Fort Worth and later Austin, Texas. After completing his active duty, they returned to the ranch near Burton and later Long Pine, Nebraska for five years before moving to Brook Park, Minnesota where they bought a ranch. They carried on the tradition of Shorthorn Cattle and moved the herd to Minnesota. He showed cattle at last Chicago International and had a Grand Champion and Reserve Carload of Bulls at the Denver Stock Show in 1972 and 1973. Due to health reason, he changed occupations in 1979 to Real Estate, Insurance and Sales. In the early 1990’s, Willis bought a truck and over the road he went and traveled 48 states. One night the speedometer turned over one million miles in northern Iowa. In 2004 with much regret, he sold the truck and retired to a motor home in Bassett, Nebraska. While still a member of the Loup Valley Sams Camping Club, they spent much time on Lake Superior. Willis was preceded in death by his parents; sisters, Glenus, Marion and Harriett; parents-in-law, Louis and Frieda Thiede; brothers-in-law, Wilford Secrest, Don Wolf, Forbes Cole, Clyde Irons, Larry Larsen and Richard Sylva; and nephews, Don Gerest and Leslie Larsen. He is survived by his wife of 66 years, Ellen of Bassett; sister-in-law, Virginia Sylva of Springview, along with nieces, nephews and other family members. Funeral Services were held on Wednesday, December 4, 2019 at the Zion Lutheran Church in Ainsworth with Pastor Georg Williams officiating. Music was provided by Georgia Williams with the congregation singing, “I’m But A Stranger Here” and “What A Friend We Have in Jesus.” Casket bearers were: Bill Svoboda, John Svoboda, Matt Larsen, Lane Larsen, Travis Secrest and Hunter Nickless. Honorary Bearers were: All of Willis’ Other Family & Friends, Wes Sandall and Wayne Iverson-deceased. Memorials were suggested to the Zion Lutheran Church or the Rock County Senior Center. Hoch Funeral Home of Ainsworth was in charge of service arrangements. Online condolences may be made to the family at www.hochfuneralhome.com.

Willis Frank Miller was born May 11, 1931 on the family farm south of Chappell, Nebraska. He passed away November 28, 2019 at the Rock County Hospital Long Term Care at the age of 88 years, six months and 17 days. He was born to Frank and... View Obituary & Service Information

The family of Mr. Willis F. Miller created this Life Tributes page to make it easy to share your memories.