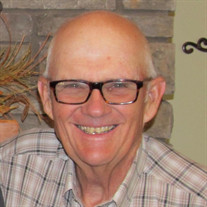 William John Sybrant, the middle child of Ebenezer and Thelma (Miller) Sybrant, was born May 2, 1944, in Ainsworth Nebraska. Bill entered heaven on March 24, 2021, at the Rock County Hospital at Bassett, Nebraska. He grew up on the ranch southeast of Bassett, that he lived at most of his life. Bill attended grade school from kindergarten to the 4th grade at Fish Lake School Dist#10. He then went to Bassett Grade School through the 8th grade, graduating from Rock County High School in 1963. Bill met Carolyn (Goldfuss) of Atkinson, Nebraska, at a Luther League Rally in Hartington, Nebraska and they were later married on October 16, 1965. Bill and Carolyn ranched and milked cows with Bill’s folks on the home place until the spring of 1972, when they purchased a dairy around Thorp, Wisconsin. In the spring of 1977, they sold the dairy and moved into Thorp. Bill did carpenter work and they sold Shaklee products while there. In the fall of 1980, Bill and family moved back to the ranch, where he ranched with his father until his father’s death in 1991. Bill continued the family ranch and semi-retired in 2015, but continued helping his son Jeff, being a vital part of the operation. Bill enjoyed all aspects of ranching in the Sandhills. He loved his family deeply and loved playing checkers and cards with his grandkids. He enjoyed family history, cowboy poetry, woodworking, watching the weather channel and swathing hay in the summer. Bill enjoyed his neighbors thoroughly and was always ready to help others in need. Bill’s church was an extension of his family. On February 23, 2021, Bill was diagnosed with cancer. He was a rock for his family the entire time praying with them, and for them. Bill’s great sense of humor was an encouragement to many during his brief illness. Bill will be remembered for his love of family, community, his sense of humor and his strong faith in the Lord, a man who walked what he talked. Bill was preceded in death by his parents, Ebenezer and Thelma Sybrant; brother in law, Adolph ‘Sonny’ Nachtman and nephew, Shane Nachtman. He is survived by his wife, Carolyn of 55 years; their three children, Scott (Dawn) of Bennet, Nebraska, Jeff (Kat) of Bassett and Jennifer (Chad) Peterson of Molt, Montana; eight grandchildren, Courtney Sybrant and fiance Martin Gonzalez, Lincoln, Nebraska, Alex (Emily) Sybrant of Stuart, Nebraska, Kelsey (Ray) Angelelli of Springview, Nebraska, Nate Sybrant of Bassett, Luke, Jesse, Claire and Chloe Peterson of Molt, Montana; two great-grandchildren, Max and Myles of Springview. Bill is also survived by his sister, Doris Nachtman of Stuart and a brother, Steve (Cathy) Sybrant of Bassett along with numerous other relatives and many, many friends. Funeral Services were held March 29, 2021 at the Sybrant Community Church near Bassett with Pastor Steve Matthews, Tim Shaw, Steve Wiiest and Jared Drenth officiating. Music was provided by Faye Smith with the congregation singing, “It Is Well With My Soul,” “Old Rugged Cross,” “What A Day That Will Be” and “I’ll Fly Away”. Interment followed in the Sybrant Cemetery. Casket Bearers were: Alex Sybrant, Luke Peterson, Justin Addison, Nate Sybrant, Jesse Peterson and Lee Nachtman. Honorary Casket Beares were: Steven Bearnson, Dale Sybrant, Dave Sybrant, Keith Ammon, Dennis Jilg, Ron Iverson, Mickey Lanz and Kent Smith. Memorials were suggested to the family for future designation in Bill’s name.

William John Sybrant, the middle child of Ebenezer and Thelma (Miller) Sybrant, was born May 2, 1944, in Ainsworth Nebraska. Bill entered heaven on March 24, 2021, at the Rock County Hospital at Bassett, Nebraska. He grew up on the ranch southeast... View Obituary & Service Information

The family of William J. "Bill" Sybrant created this Life Tributes page to make it easy to share your memories.

William John Sybrant, the middle child of Ebenezer and Thelma...