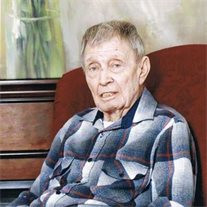 William Arden Stech passed away on August 8, 2017 in the Rock County Hospital Long Term Care at Bassett, Nebraska. Arden was born on March 19, 1925 to John and Jessie Fay (Childs) Stech of Powell, Wyoming. His family moved to Chadron, Nebraska where he went to high school and Chadron State College. He was inducted into the United States Army in July of 1943. He served as a combat infantry rifleman. He served in France and Germany, and was often in harms way. After the war, Arden went to the University of Nebraska-College of Pharmacy on the GI Bill. He moved back to Chadron as a pharmacist where he met and married Roena Mae Davis, "Rani and Mam" in November, 1951. Arden and Rani began a job search by simply driving east until they found a pharmacy that needed a druggist. They both liked Ainsworth and settled there in 1952. Arden worked at Whitney Drug until Mr. Whitney passed away and the store was renamed Stech Pharmacy in 1960. Arden and Rani had two children; Teri Burdick and husband, Terry of Wood Lake, Nebraska, and Jim Stech of Lexington, Kentucky. They had three grandchildren; Loralea Frank and husband, Mark of Kearney, Nebraska, Byron Burdick and wife, Julia of Wood Lake, and Harris Stech also of Lexington, Kentucky, Arden was blessed with six great-grandchildren along with nieces and nephews to include locally, Nancy-Mrs. Ken Falk of Ainsworth. Arden loved the outdoors. He enjoyed fishing and bird hunting with his dogs. He often walked the "high hills" with his dogs. He was an honest and generous man of faith. He was a wonderful father and grandfather. A Celebration of Life Service was held on August 11, 2017 at the United Methodist Church in Ainsworth, Nebraska, with Pastors David Randall, Bruce Beebout and Don Letellier officiating at the service. Prelude and postlude music was provided by Sherry Campbell. A vocal selection of "In The Garden" was provided by Lisa Wiebesiek and a piano medley concluding with the special selection of "Danny Boy" was provided by Sherry Campbell. The Eulogy was given by grandchildren, Loralea Frank and Byron Burdick. Pallbearers were: Dr. Jim Stech, Terry Burdick, Mark Frank, Byron Burdick, Harris Stech and Brad Jones. Honorary Bearers were: All of Arden's other family and friends. A private family burial followed at the Ainsworth Cemetery with Military Honors being provided by the Ainsworth American Legion Post #79. In lieu of flowers, memorials donations may be made to the family which will be used as a scholarship fund for a student in pursuit of the study of Pharmacy. Hoch Funeral Home of Ainsworth was in charge of the arrangements.

The family of Mr. William Arden "Arden" Stech created this Life Tributes page to make it easy to share your memories.