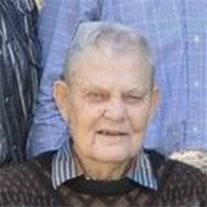 Wilford Albert Leach was born in Hyannis, Nebraska, October 9, 1924 to Bert and Dagmar (Jensen) Leach. He passed away on February 26, 2016, at the Sutton Community Home in Sutton, Nebraska. Wilford grew up on the family ranch near Arthur, Nebraska. In 1941, the family moved to a ranch south of Johnstown, Nebraska. Wilford graduated from Ainsworth High School with the class of 1942. He enlisted in the United States Navy Air Corps in July 1943 as a B-24 Liberator gunner. When he returned home, he engaged in ranching and farming at the family ranch. Doris Jean Botsford was Wilford's high school sweetheart and the love of his life. Being a man of few words, when he was home on leave from the Navy, he handed Doris a box. When she opened it and saw a ring inside, she said "Does this mean you want to get married?" They were married as soon as he returned from the war on June 26, 1946. Four sons were born to this union, Jerry, Gary, Lanny and Bert. Wilford and Doris were blessed with nine grandchildren and thirteen great grandchildren. Family was the "light of his life". He could not wait to hold each new baby that was added to the family. His children and grandchildren always knew he would be present at every activity they participated in encouraging and supporting them. Brown County and the Ainsworth community was very important to Wilford. He served as mayor, county commissioner, and on various other boards and committees. Wilford was an avid sports fan. In his younger days he played football, was a boxer, coached and umpired baseball. He was a dedicated Nebraska football fan, as well as a fan of the Sutton Mustangs, and Ainsworth Bulldogs, and was often found near the top of the bleachers cheering on the teams. Wilford loved the Lord and followed His teachings. He was faithful, honest, and generous. He was a wonderful example for his children and grandchildren. Hobbies he enjoyed were playing pitch and fishing. Wilford loved the ranch life and was made an honorary mustang trainer at the Fort Worth, Texas, 2009 Extreme Mustang Makeover. He was preceded in death by his parents and brother, Willard. Survivors include: his wife, Doris; sons: Jerry (Karen) of Sutton, Gary (Phyllis) of Ainsworth, Nebraska, Lanny (Kathy) of Elk Creek, California, and Bert (Gina) of Sutton, nine grandchildren and thirteen great grandchildren; siblings: twin sister Winnie Walz of Ainsworth and sister Jeanne Hounshell of San Clemente, California; nieces and nephews. Funeral Services were held on March 2, 2016 at the United Methodist Church in Ainsworth, with Reverend David Randall and Reverend Bill Armold officiating the service. Music was provided by Sherry Campbell. Instrumental selections of "Battle Hymn of The Republic," "Anchors Away" were provided, as well as "Amazing Grace" as the congregational selection. Pallbearers were Jeff Hofaker, Kenny Baker, Ben Shunko, Josh Davis, Bryan Doke, Logan Leach, Garrett Leach and Trevor Leach. Honorary bearers were all of Wilford's other grandchildren and great-grandchildren. A poem written by Stacey Hofaker was read, and special memories of the grandchildren were shared by Mackenzie Shunko, as well as special memories being shared by other family & friends. Burial followed at the Ainsworth Cemetery with Military Honors being provided by the Ainsworth American Legion Post #79. Hoch Funeral Home of Ainsworth was in charge of the arrangements. In lieu of flowers the family suggests memorials be made in Wilford's name for future designation.

Wilford Albert Leach was born in Hyannis, Nebraska, October 9, 1924 to Bert and Dagmar (Jensen) Leach. He passed away on February 26, 2016, at the Sutton Community Home in Sutton, Nebraska. Wilford grew up on the family ranch near Arthur, Nebraska.... View Obituary & Service Information

The family of Mr. Wilford A. Leach created this Life Tributes page to make it easy to share your memories.