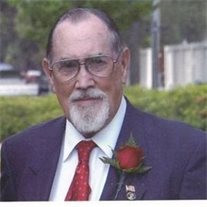 Wiley Phillip Lentz was born July 11, 1931 in Long Pine, Nebraska, and passed away on September 19, 2013 at the Good Samaritan Hospital in Kearney, Nebrska. He was the first child of Elmer T. Lentz, Sr. and Viola Esther (Hakes) Lentz. Wiley graduated from Long Pine High School in 1950. Following high school Wiley was employed by Don Higgins at the Ainsworth Airport before enlisting in the Air Force. He served as a flight mechanic from 1950 until his honorable discharge in 1954. On May 20, 1956 Wiley married Shirley Mae Burdick in Long Pine. Wiley and Shirley spent their entire 57 years of marriage living in Ainsworth. To this union was born five children, Kathy, William, Thomas, Robert and Stacey. Wiley spent over 40 years as an employee and later part owner of the Red and White Grocery Store in Ainsworth where he ran the meat department. Wiley was very active in his youth and loved spending many hours roaming the Long Pine Canyon with his brothers and friends. Wiley was a letterman in basketball and also enjoyed playing baseball. Always an enthusiast of learning, Wiley had a particular interest in science. Under the mentoring of Dr. Morris Skinner, Wiley became very skilled at identifying fossils and had a good understanding of the geology of this part of Nebraska. The family spent many summer hours digging fossils, collecting rocks and visiting rock shops and rock swaps in Nebraska and South Dakota. In his early adulthood Wiley enjoyed hunting, blue rock shoots and re-loading shells with his buddies. Wiley was infatuated with aviation all of his life and was a private pilot before he entered the Air Force. His father would take him to the Ainsworth Airbase where Elmer worked during World War II. Wiley never tired of making trips out to the airport and served on the Airport Authority for many years. Another great joy for Wiley and his friends were motorcycles. He always found time to take one of the kids or Shirley on rides on Sundays and in the evenings. Wiley was a member of the United Congregational Church of Christ for over 50 years; the American Legion for 60 years; and served on many local boards including the Park Homes Board; the Park Board and the County Veterans Service Committee. He was a member of the Ainsworth Rod and Gun Club; the North Central Nebraska Rockhounds; the Cow Country Carvers and he served on the Legion Honor Guard until no longer able to physically carry out the duty. Wiley considered it his duty to honor his fellow veterans through the local school programs, the color guard at funerals and the recent publishing of the Brown County Veterans book. Wiley was preceded in death by his parents; infant twin brothers; his brother-in-law, Dwire Goodwin; his grandson, Ryan Emmons; and his brother, Ralph. Wiley is survived by his wife Shirley; 5 children, Kathy Emmons and Bill Shelton and Kathy's daughter, Katie all of Cheyenne, Wyo., Bill and Connie Lentz of David City, Ne. and their children Jesse of Columbus, Ne. and Sarah of Wayne, Ne., Tom and Mika Lentz of McCook, Ne. and their children Coleton, Gracie and Grady, Robert and Maranda Lentz of Fort Lee, Virginia and their son Hudson, and Stacey and Travis Gilliland of Ainsworth, and their daughters Kirsten and Cassidy. Wiley is also survived by brothers, Fred Lentz and wife Lois of Elkhorn, Ne., Elmer T. Lentz, Jr. and wife Eiko of Ainsworth; sister-in-law Shirley J. Lentz of Ainsworth; sister, Nancy Goodwin of Cody, Ne., and brother, Steve Lentz and his wife Sandy of Long Pine; brothers-in-law, Gene Burdick and wife Mary Ann of Lakewood, Colorado, Ken Burdick and wife Rose of Arlington, Oregon, and Dick Burdick and wife Jane of Arvada, Colorado, as well as a host of nieces and nephews. Wiley was a loving spouse, father and grandfather, was immensely loyal to family and friends and was committed to his family, friends, church and community. Funeral Services were held on Monday, September 23, 2013 at the Congregational United Church of Christ in Ainsworth, Nebraska with Pastor Neva Murphy officiating over the service. Special instrumental selections of "The Old Rugged Cross" and "His Eye Is On The Sparrow" were provided by Sherry Campbell. Pallbearers were, Rick Lentz, Alan Lentz, Tony Lentz, Mike Lentz, Pat Lentz, and Dan Lentz. Burial was held at the Grandview Cemetery in Long Pine with Military Honors being provided by the Ainsworth American Legion Post #79. Hoch Funeral Home was in charge of the arrangements.

Wiley Phillip Lentz was born July 11, 1931 in Long Pine, Nebraska, and passed away on September 19, 2013 at the Good Samaritan Hospital in Kearney, Nebrska. He was the first child of Elmer T. Lentz, Sr. and Viola Esther (Hakes) Lentz. Wiley... View Obituary & Service Information

The family of Mr. Wiley Phillip Lentz created this Life Tributes page to make it easy to share your memories.