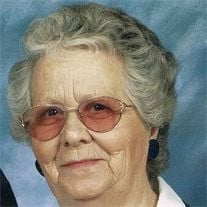 Wilda Jeanette (Williamson) Nelson was born December 6, 1.922 to Reuben 0. and Alma J. (Everingham) Williamson in Long Pine, Nebraska. Wilda graduated from Ainsworth High School with the class of 1940. On June 8, 1940, Wilda married Milan L. Nelson in the parsonage of the Ainsworth United Methodist Church. Their first home was a 3-room house west of Ainsworth in an apple orchard. During the early years of their marriage they moved several times between Nebraska, Oregon, and Idaho. Wilda was a proud homemaker and transformed every house into a comfortable and inviting home for her growing family. Their son Harlan "Roy" was born in Grants Pass, Oregon, on June 13, 1941. Another son, Lyle Victor was born on November 7, 1943, and passed away a month later. Milan entered the United States Navy in April of 1945. After his discharge in April of 1946 the couple returned to Ainsworth where their 3 daughters were born; Joyce K. on May 9, 1946, Norma L. on August 13, 1948, and Joanne E. on September 19, 1950. Wilda and Milan moved to Bassett in the fall of 1955, where they started a dairy farm and delivered milk to the homes and businesses of Bassett until the fall of 1958. Following this, they entered a ranching partnership with Robert Isham, and their son Roy and his wife Pat (Terry), raising yearling steers on land south of Bassett, and southwest of Newport until 1968. In 1969 Milan and Wilda bought a farm near Plainview, Nebraska, operating a Grade A Dairy farm, and later buying another acreage north of Creighton, Nebraska, to set up a sow/pig farming operation. In 1980 the couple retired to southern Missouri where they enjoyed several years of fishing and following the Southern Missouri State Lady Bears' basketball team. They spent many weeks each year camping at Treasure Lake in Branson, Missouri and enjoying all the entertainment provided at Silver Dollar City. In 2003 Wilda and Milan again returned to their home state of Nebraska, moving first to Fullerton for 6 years, and making their final home in Neligh, Nebraska in 2009. In June 2010, the couple celebrated their 70th wedding anniversary with many friends and family in attendance. Their 72 1/2 years of love, adventure, and fun came to an end December 12, 2012 when Milan passed away. They had begun each day with prayer and devotions; and Wilda was a faithful servant of the Lord to the end. Wilda was preceded in death by her husband Milan, their infant son Lyle, and granddaughter Terisa Nelson, her parents, her brother Ausby Williamson, sisters Dymple Hughes, and Lois Herring. Wilda is survived by son Harlan "Roy" (Patty) Nelson of Ainsworth; daughters Joyce Nelson (Ron McNally) of Phenix City, Alabama, Norma (Phil) Homer of Henderson, Nevada, and Joanne Haberlan of Lawrence, Kansas; 9 grandchildren, Rod Nelson, Nathan Nelson, Lanny Hart, Amy Sanger, Jared Sanger, Mandy Sanger, John McNally, Michele McNally, and Kelly McNally-Cook; also 19 great-grandchildren, and 1 great-great-grandson. Funeral Services were held on October 25, 2014 at the United Methodist Church in Ainsworth, Nebraska with Pastor Eldon Davis officiating over the service. Music was provided by Marilyn Williams and Marilyn Philben providing the selections of "Amazing Grace" and "How Great Thou Art". A Special music selection of "Somewhere Over the Rainbow" was provided by Michele McNally, Kelly McNally-Cook, Bailey Landholm, Lindsey Landholm, Eleyna Sanger, Jacey Jensen and Ethan Jensen. Pallbearers were Rodney Nelson, John McNally, Nathan Nelson, Jared Sanger, Gage McNally, and Rylan McNally. Honorary bearers were Phil Herring, Ron Nelson, Tom Nelson, and Rich Nelson. Burial was held in the Ainsworth Cemetery at Ainsworth, Nebraska. Hoch Funeral Home of Ainsworth was in charge of the arrangements. In lieu of flowers, memorials were directed to the Antelope Memorial Hospital or to the Ainsworth United Methodist Church.

The family of Mrs. Wilda Jeanette (Williamson) Nelson created this Life Tributes page to make it easy to share your memories.