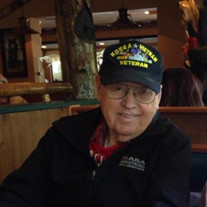 Weneth “Wen” Dwane Painter, age 84 passed away in Pleasanton, CA on April 21, 2020 at the age of 84. Wen was born May 8, 1935 in Ainsworth, NE to Ward and Lois (Peterson) Painter. Wen grew up in Mills and Long Pine, NE. He attended a one-room school house in Mills and never let anyone forget that the first astronauts were mid-west, one-room school house educated, and extraordinary men! Wen graduated from Long Pine High School in 1953. Shortly thereafter Wen joined the U.S. Air Force in June of 1953. Wen loved and was proud of his service in the Air Force. After his service in the Air Force, Wen attended Wichita State University, receiving his Bachelor of Science degree in Aeronautical Engineering. Upon graduation, Wen moved his family to Lancaster, CA. He was employed with NASA at the Dryden Research Facility, working on many projects including the HL-10 Lifting Body (a precursor to the Space Shuttle). Upon retirement from NASA, Wen worked at the National Test Pilot School in Mojave, training students both in Mojave and all over the World. Wen’s passion was Aviation, from a child with him building an airplane that was suspended from trees on the family ranch. While a teenager he received his Private Pilot’s license trading work at the Ainsworth Airport for the cost of the training and licensing. Over the years Wen was licensed in multiple fixed wing aircraft. Wen was also as licensed a Commercial Pilot and Flight Instructor. He also obtained two Master’s Degrees, from the University of Southern California, as well as, from Cal-Poly San Luis Obispo. He also taught at Aeronautical Engineering at Cal-Poly. He trained well over a 100 students in both engine and glider certifications. One of his students was the actor Christopher Reeve (Superman) and Wen was fond of saying that he taught Superman how to fly. He also was very active in the Explorer Scout Aviation program teaching many youth how to fly, many of the Scouts in the program went on to distinguished careers in the Air Force, NASA and as Commercial Pilots. He was an active member in the Experimental Aircraft Association and the Society of Experimental Test Pilots. Wen was a participant with the operations at the Mojave Airport (later designated as the Mojave Space Port), donating countless hours of his time. Wen was preceded in death by his parents; and brothers, Jerry Painter and Jackie Painter; as well as his son-in-law, Curt Magnusson and step-daughter, Kelly Cronk. He is survived by his wife JoAnn of Pleasanton; daughters Pam (Terry) Carroll of Long Pine and Debbie Magnusson of Winchester, CA; son, Kent (Karen) Painter of Beaverton, OR; step-son, Steve (Claudia) Siglin of Pleasanton; step-daughter, Jamie (Chuck) Raye of Lompoc, CA. He is also survived by twelve grandchildren, eleven great-grandchildren and two great-great-grandchildren; and a sister, Wardene Roark of Long Pine; along with numerous nieces, nephews and other family members. A Private Family Graveside Service was held at the Grandview Cemetery in Long Pine. The Military Flag Presentation was conducted by Bassett American Legion Post #123. The family respectfully requests that in lieu of flowers, memorials in Wen’s honor be made to the Mojave Transportation Museum. A Celebration of Life will be held at a date to be announced in the future. Hoch Funeral Home of Ainsworth and Graham-Hitch Mortuary of Pleasanton are assisting with arrangements. Words of condolences can be left at www.hochfuneralhome.com.

The family of Weneth D. "Wen" Painter created this Life Tributes page to make it easy to share your memories.