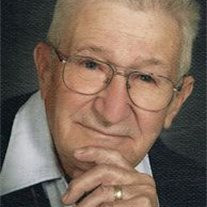 Wayne L. Iverson, the first of four children, was born to Elbert J. "E.J." and Cecelia P. "Ruby" (Seberger) Iverson on November 17, 1926 at Stuart, Nebraska. Wayne lived on a ranch south of Newport, Nebraska while growing up, always loving the country life. He attended a one-room country school for grade school and went to Rock County High School in Bassett. Wayne joined the United States Navy in 1944, finishing high school during that time. He was always very proud of his service. While in the service, he had medical training and became a medic stationed at Naval Hospitals and Naval Air Bases. He served his country until July of 1946, and then returned home to the ranch. He was united in marriage to Joan H. Williams on March 16, 1947 at the United Methodist Church in Kearney, Nebraska. Four children were born to this union: Linda, Terri, Scot and Tina. Wayne was a wonderful husband, and father, his family was his joy. He loved spending time with family and grandchildren. Their first home was at the old homestead place, also know as the old Seberger place. They lived there from 1947 to 1949 when they moved to the Davis place, south of Newport. In 1961, their home was destroyed by fire and the family moved to the home ranch south of Bassett. They made their home there until they retired into Bassett on February 16, 1990. Wayne loved fishing and always was ready to tell a story about the one that got away. Spending time with his family was so important to him. One of his passions was his classic automobiles giving rides to everyone and driving in parades. In his later years much of his time was spent in the wood shop crafting many family heirlooms. Wayne was active in the United Methodist Church and served as a board member. He loved the fellowship that he found there. He volunteered and delivered meals for the Meals on Wheels Program for many years. He was always available to lend a helping hand to anyone who needed help. When his children were young, he was involved in the Go-Getters 4-H Club. Wayne will be remembered for his love of a good laugh, his easy smile, his quick wit, and always for being a man of integrity. His family and friends will miss him forever. Wayne passed away on January 28, 2016 at the Rock County Hospital Long Term Care in Bassett at the age of 89 years, two months and eleven days. Wayne was preceded in death by his wife, Joan who passed away February 15, 2003. Also preceding him in death were his parents, E.J. and Ruby Iverson; his brother, Stanley Iverson; his grandson, Erik John Zielke; his father and mother-in-law, John and Gladys Williams; and brother-in-law, Floyd Bachkora. Wayne is survived by his children, Linda Hutton and husband, Mike of Sioux City, Iowa, Terri Hansen and husband, Scott of Rice, Minnesota, Scot Iverson and wife, Julie of Bassett and Tina Schearer and husband, Mike of Blue Springs, Missouri; seven grandchildren, Corey Werner of Broomfield, Colorado, Jason Werner of Athens, Ohio, Whitney Hanson of Otsego, Minnesota, Brianna Franks of Blue Springs, Missouri, Joni Thiesse of Marana, Arizona, Greg Iverson of Wymore, Nebraska and Tucker Iverson of Bassett. Also surviving is a brother, Keith "Bud" Iverson of Phoenix, Arizona; a sister, Lois Zlomke of Omaha, Nebraska and a sister-in-law, Vera Bachkora of Kearney; along with nieces, nephews and other family members. Funeral Services were held at the Bassett United Methodist Church with Pastor Rod Heilbrun officiating at the service. Music was provided by JoAnn Swanson with Stanley Larson singing, "In The Garden," "The Old Rugged Cross," and "When We All Get To Heaven." Pallbearers were: Greg Iverson, Tucker Iverson, Joni Thiesse, Jason Werner, Corey Werner, Whitney Hanson and Brianna Franks. Honorary bearers were Gabriel Iverson, Rhett Iverson and Desmond Hanson. Burial was held at the Bassett Memorial Park Cemetery with Military Honors provided by the Bassett American Legion Post #123. Memorials were suggested to the Bassett American Legion Post #123 or to the Bassett United Methodist Church.

The family of Mr. Wayne L. Iverson created this Life Tributes page to make it easy to share your memories.

Wayne L. Iverson, the first of four children, was born to Elbert...