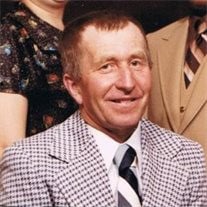 Wayne "Bud" Simons of Springview, Nebraska passed away on Saturday, April 2, 2016 at the Winner Regional Hospital Long Term Care Center in Winner, South Dakota at the age of 84 years and 24 days. He was born at home on March 9, 1932 in Sparks, Nebraska to George J. and Minnie Mae (Archer) Simons. Bud attended grade school at Happy Hollow in Sparks. He worked for local farmers and ranchers until he was drafted into the United States Army during the Korean War, and was stationed at the AFB Eielson Fairbanks, Alaska. On June 15, 1956, Bud married Nancy Worden and to this union three children were born Doreen; David and Dawn. Bud, Nancy and their children moved to Springview, where he drove a fuel delivery truck for the Co-op and later for Gary Ross. Bud was preceded in death by his parents; his wife Nancy; brother, Giles; brothers-in-law, Ronald Kinzer, Marion Delfs, and Virgil Billings; sister-in-law, Diane Simons; niece, Lisa Delfs, and grandson, Keith Tucker. He is survived by his three children, Doreen (Edward) Tucker of Springtown, Texas, David (Brinda) Simons of Winner, South Dakota and Dawn Simons of Millard, Nebraska. His sisters, Catherine Billings of Valentine, Nebraska, Evelyn Kinzer of Gregory, South Dakota, and Eunice Delfs of Chamberlain, South Dakota. Six grandchildren and eight great-grandchildren, with three pending. Funeral service were held at the New Hope Community Church in Springview, Nebraska with Pastor George Kraft officiating the service. Special music selections of "Amazing Grace" was offered by Josh & Megan Bawek, as well as a CD selection of "Daddy Never Was The Cadillac Kind" by Confederate Railroad. Congregational selections were "When We All Get To Heaven" and "When the Roll Is Called Up Yonder." Burial followed at the Mt. Hope Cemetery near Springview with Military Honors being presented by the Springview American Legion Post #98. Arrangements were handled through Hoch Funeral Home of Ainsworth, Nebraska. Memorials were suggested to the family in his name.

Wayne "Bud" Simons of Springview, Nebraska passed away on Saturday, April 2, 2016 at the Winner Regional Hospital Long Term Care Center in Winner, South Dakota at the age of 84 years and 24 days. He was born at home on March 9, 1932 in Sparks,... View Obituary & Service Information

The family of Mr. Wayne George "Bud" Simons created this Life Tributes page to make it easy to share your memories.

Wayne &quot;Bud&quot; Simons of Springview, Nebraska passed away on Saturday,...