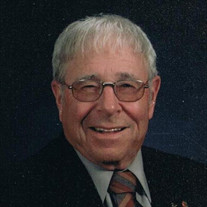 Wayne Sylvester Bower was born on December 4, 1936 to Darrel S. Bower and Lois (Best) Bower at the Ainsworth Hospital. He passed away January 15, 2021 at age 84 from complications of Covid-19 and heart failure at the Sandhills Care Center in Ainsworth. Wayne attended school in Ainsworth, Nebraska and graduated with the class of 1955. After graduation from high school, Wayne went into farming with his father who nurtured his lifelong love of farming. Wayne was baptized in the Ainsworth Methodist Church and was a lifelong member. Wayne married his high school sweetheart, Lucinda A. Gilchrist, on February 23, 1958. To this union two children were born, Tamela Lynn and Thomas Sylvester. Family and friends meant everything to Wayne and always came first with him. His greatest pride were his three grandchildren, Gabriela, Luis, and Hallie, always following each of their activities and accomplishments in both high school and college. He loved hearing about the great grandchildren, Henry and new baby Ruby. While unable to visit them, he was able to keep in contact and see them with his phone. Wayne enjoyed his church family and Lions Club when he was able. For many years he enjoyed bowling and when younger, roller skating. He also belonged to Masons and Eastern Star, serving as Worthy Patron alongside his wife, Cindy, and again with his sister, Betty. Wayne’s favorite thing besides farming was his love of music and he could almost always be found in the choir on Sunday morning. He took piano lessons in grade school, then tuba in junior high. Some of his favorite memories were of Ainsworth High School band and choir. Wayne followed sports and was an avid Cornhusker and Bulldog fan, especially boy’s basketball and girl’s volleyball. He was preceded in death by parents, Darrel and Lois Bower; sister, Betty (Bower) Kirkpatrick; in-laws, Frazier and Aurelia Gilchrist, and brothers-in-law, Jerry Purviance and Ken Osborn. Left to cherish his memory are his wife, Cindy of Ainsworth; daughter, Tammy (Diego) Ayala of Lincoln, NE: son, Tom (Betty) Bower of Ainsworth; granddaughter, Gabriela Ayala and husband Braden Johnson of Lincoln, NE; grandson, Luis (Kaylee) Ayala of Omaha, NE; granddaughter, Hallie Bower of Salt Lake City, UT, and great-grandchildren Henry and Ruby Ayala of Omaha. Other family members include brother-in-law, Dale Kirkpatrick; nieces, Kelly Foster, Susan Stec and nephew Darren Kirkpatrick; cousins, Shirley (Baker) Hoefel and Phyllis Carson and a host of friends and relatives. . Memorial Services were held on Saturday July 31, 2021 at the United Methodist Church in Ainsworth with Pastor Martin Leeper officiating. Music was provided by Sherry Campbell. The special music of, “Just A Closer Walk With Thee” and “Will The Circle Be Unbroken” was provided by Diego Ayala & Gabriela Ayala-Johnson. Organizational Rites were conducted by Bethany Chapter #113 Order of the Eastern Star. Inurnment followed in the Ainsworth Cemetery. Honorary Urn Bearers were Luis Ayala, Gabriela Ayala-Johnson and Hallie Bower. Memorials are suggested to the family in Wayne’s name for a future designation.

Wayne Sylvester Bower was born on December 4, 1936 to Darrel S. Bower and Lois (Best) Bower at the Ainsworth Hospital. He passed away January 15, 2021 at age 84 from complications of Covid-19 and heart failure at the Sandhills Care Center in... View Obituary & Service Information

The family of Wayne S. Spud" Bower created this Life Tributes page to make it easy to share your memories.