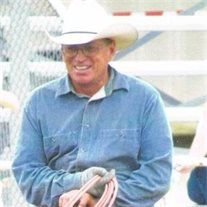 Warren Eldon Horner was born on September 3, 1958 in Ainsworth, Nebraska to Eldon and Ila (Moore) Horner of Rose, Nebraska. He was the fourth child in a family that eventually grew to eight children. The Horner Ranch was the perfect place for a young boy to grow and explore. There were cows, horses, dogs, cats, the great outdoors, and sisters. Warren loved horses the most. From atop a horse he could rope calves, cows, fence posts, and sisters. Warren attended kindergarten through third grade at District 4, a one-room school house on the southwest corner of his parents' ranch. After District 4 closed in May of 1966 and merged with other small schools in the county, Warren finished out his elementary school years at District 72, a brand new, two-room school house, plumbed with indoor bathrooms and running water, built right across from the now closed Rose Post Office. In high school, Warren followed in the footsteps of his three older sisters, boarding in Bassett while attending Rock County High School. He enjoyed his involvement in the music program run by Kay Lynn Kalkowski. He loved playing basketball with his friends and was an active member of the youth group at Valley Grove Community Church. His youth group leaders, Gordon and Shirley Hitchcock, helped him grow in faith and devotion to his Lord Jesus Christ, and they became his life-long friends. After graduation from Rock County High School in 1976, Warren earned his Associates Degree in Agriculture at the Nebraska College of Technical Agriculture in Curtis, Nebraska. Even though it didn't further his career plans, he chose to continue his education at Big Sky Bible College, located at the foot of the Judith Mountains near Lewistown, Montana. Studying and knowing God's Word was important to Warren. After college, Warren returned home to help his parents on the ranch and resumed his favorite sport, Team Roping. His specialty was heeling, and he and his buddies worked very well together, winning many local rodeos, even a National Championship. Being the only son in the family, Warren filled the brother gap with friends, many from his involvement in Rodeo. Not only did Warren team rope at Rodeos, he was often given the honor of singing the "National Anthem" at the opening of these events. Warren was a card holder in the PRCA (Pro Rodeo Cowboy Association) and a gold card member in the Nebraska Rodeo Association. He was a Team Roping Champion in both the Mid-State Rodeo Association and the Nebraska Rodeo Association. He belonged to the USTRC (United States Team Roping Championship) since the inception of it. He was a USTRC National Champion back when the Finals were held in Guthrie, Oklahoma....he won a Trailer there. Warren won numerous saddles as well as buckles and many other prizes. He won these at local club ropings and jackpots, Fire & Ice and NTRC ropings, USTRC events, and Rodeos. Warren remained on the ranch after his father passed away in 1986 and cared for his mother before her death in 2013. He loved everything outdoors, he loved to sing, he loved his family, and he developed deep friendships with his rodeo family. Warren was preceded in death by his parents, Eldon and Ila Horner, his brother-in-law Jonathan Busenitz, his niece Kayla Joy Klooz, and his grandniece Brenna Layne Clark. He is survived by his sisters: Velda Klooz and husband Jim of Purdum, Nebraska; Carolyn Clark and husband Stan of Long Pine, Nebraska; Teresa Brauser and husband Larry of Fort Collins, Colorado; Joyce Grinder and husband Brian of Cheney, Washington; Mary Boehm and husband Tom of Elbing, Kansas; Rachel Busenitz and husband Gordon of Newton, Kansas; Genia Entz and husband James of Benton, Kansas; 41 nieces and nephews; 31 great nieces and great nephews and friends too many to count. Funeral Services were held on January 23, 2016 at the United Methodist Church in Bassett, Nebraska. Pastor Rod Heilbrun and Andrew Boehm officiated the service. The obituary was read by brother-in-law, Brian Grinder. Special music selections were, "When I Get Where I Am Going" sung by Zachary and Meghan Entz "In The Palm of You Hand" sung by Jeana (Klooz) Hackel, and "The Dance" (recorded and sung by Warren Horner.) Carolyn Clark shared stories of Warren and the family. Poems were read by Gunnar Hitchcock entitled "Master of One" and LeAnn Huhman shared Cowboy Association Remembrances as well as a poem written by Sandra Mann. Pallbearers were Warren's nephews, Jon Clark, John Klooz, Matthew Boehm, Zachary Entz, Caleb Entz, Michael Brauser, Joshua Boehm, Joseph Busenitz, and Seth Entz, and his other nephews. Honorary bearers were all of Warren's roping buddies, friends and neighbors. In lieu of flowers memorials were suggested to the family for a future designation.

Warren Eldon Horner was born on September 3, 1958 in Ainsworth, Nebraska to Eldon and Ila (Moore) Horner of Rose, Nebraska. He was the fourth child in a family that eventually grew to eight children. The Horner Ranch was the perfect place for... View Obituary & Service Information

The family of Mr. Warren E. Horner created this Life Tributes page to make it easy to share your memories.