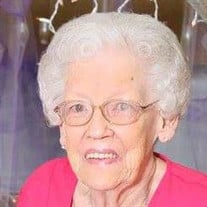 Wanda A. Lingenfelter, 91, passed away on August 15, 2019 at the Rock County Hospital Long Term Care at Bassett, Nebraska. She was born on November 7, 1927 to Orval and Alice (Timmerman) Vargason at Newport, Nebraska in the home of her Grandpa Vargason. Wanda had an older sister, Marjorie. The girls attended grade school at Riverview, Nebraska. Wanda graduated from Keya Paha High School at the age of 16. Shortly after graduation, Wanda accompanied her parents to Utah. This was during World War II and the family worked in a turkey plant. That fall, Wanda received a call from her brother-in-law, Walter Palmer, asking if she would come back and teach in Keya Paha County. She taught for two years. While teaching, Wanda started dating the love of her life, William Lingenfelter, and she and Bill were married on May 18, 1947 at Riverview. To this union, two sons were born, Richard "Rick", in 1949 and David "Dave" born in 1951. The family lived in the Riverview area for several years. They also ranched in Rock County. In 1971, Bill and Wanda moved to Wisconsin, where they had a dairy farm. They moved to Ainsworth in 1981 and Wanda worked at the D & B Cafe. The couple enjoyed gardening and Wanda was an avid book reader and made many afghans. Bill passed away on August 11, 2004 and Wanda continued to make her home in Long Pine until she fell and broke her hip in May of 2013. She then became a resident at Rock County Hospital Long Term Care. Wanda was preceded in death by her parents, Orval and Alice Vargason; her two sons, Rick and Dave; and sister, Margie Palmer Wentworth. She is survived by her two daughters-in-law, Janet Lingenfelter of Bassett, and Maxine Lingenfelter of Withee, Wisconsin; seven grandchildren, Gale (Leslie) Lingenfelter, Jeff (Michelle) Lingenfelter, Kyle Lingenfelter, June (Joe) Delveaux, Jason (Christie) Lingenfelter, Jamie Lingenfelter, and David Lingenfelter Jr.; four step grandchildren, Ron (Sharon) Pogodzinsko, Lynn (Mike) Koch, Lisa (Adam) Davis and Holly (Jeremy) Nett: 13 great-grandchildren, 12 step great-grandchildren, two great-great-grandchildren, and 15 step great-great-grandchildren; nieces, nephews, and other family members. Graveside Services were held at the Willowdale Cemetery near Newport, Nebraska with Pastor Wayne Owens officiating at the service. Pallbearers were, Gale Lingenfelter, Kyle Lingenfelter, David Lingenfelter Jr., Jeff Lingenfelter, Jason Lingenfelter, Brandon Lingenfelter, and Bruce Palmer. Honorary bearers were: All of Wanda’s Other Grandchildren, Great-Grandchildren, Great-Great-Grandchildren. In lieu of flowers memorials were suggested to Rock County Hospital Long Term Care in Bassett. Hoch Funeral Home of Bassett was in charge of the arrangements.

Wanda A. Lingenfelter, 91, passed away on August 15, 2019 at the Rock County Hospital Long Term Care at Bassett, Nebraska. She was born on November 7, 1927 to Orval and Alice (Timmerman) Vargason at Newport, Nebraska in the home of her Grandpa... View Obituary & Service Information

The family of Mrs. Wanda A. (Vargason) Lingenfelter created this Life Tributes page to make it easy to share your memories.