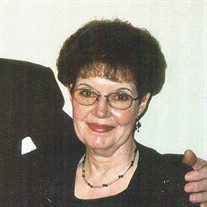 Wanda Rasmussen passed away on October 8, 2018 at the age of 89 years at home near Springview. She went to her heavenly home on her birthday. She was born on October 8, 1929 in Norden, Nebraska, to Clyde and Dorothy (Spraggins) Vaughan. Norden was her home during her elementary years. Her father was involved in some ranching, ran a small coffee shop and eventually operated a state road maintainer. When Wanda started high school, Clyde and Dorothy, along with her older brother, Warren, moved to Springview where Wanda graduated Keya Paha County High with the class of 1947. In November of that same year, she married Keith Sloan, when he returned from serving in the Navy. Keith and Wanda made their home six and one half miles north of Springview where Keith ranched with his dad. Here they raised four children; Gloria, Scott, Ken, and Carolee. On September 17, 1987, Wanda married LeRoy Rasmussen, a former high school classmate. They lived many years in Roseburg, Oregon, and later moved to Oakland, Oregon, where LeRoy established Red Hill Vineyards. In 2010, LeRoy and Wanda returned to their home state of Nebraska to retire. LeRoy passed away on September 17, 2012. In February of 2016, Wanda made her home with her daughter and son-in-law, Chet and Gloria Frey in Springview. This move brought her full circle to the very home where she had raised her family. At an early age, Wanda asked Jesus into her heart and she developed a life-long love for her savior. Her deepest desire was for her entire family to find that same relationship with Jesus. She always enjoyed being a homemaker and spending time with her family. She had a special love for babies and enjoyed making blankets and quilts for grandkids and any new babies of friends and family. She spent many years blessing babies with new blankets. Another favorite pastime was fishing. That began as a young girl when she tagged along after her dad and older brother. She also loved gardening and flowers. Preceding Wanda in death were her parents, her husband, LeRoy, son, Scott Sloan, two grandsons, Levi Sloan and Justin Sloan and brother, Warren Vaughan. She is survived by her daughter, Mrs. Chet (Gloria) Frey of Springview, her son, Ken (Sue) Sloan of Friend, Nebraska, and Carolee Sloan of Omaha, Nebraska. Nine grandchildren; Mrs. Dan Curth (Michel) of Glen Ellyn, Illinois, Mrs. Matt Hartman (Heather) of Wheaton, Illinois, Mrs. Bryan Nelson (Jaccinda) of Edwardsburg, Michigan, Jamey Sloan of Springview, Clint Keller of Johnston, Colorado, Matthew Sloan, of Pierre, South Dakota, Jocelyn Sloan of Dwight, Nebraska, Taylor Smith of Portland, Oregon, and Deacon Painter of Omaha, Nebraska. 12 great-grandchildren and sister-in-law, Ann Vaughan of Bassett, Nebraska. Memorial Services were held on October 13, 2018 at the Burton Assembly of God Church in Burton, Nebraska with Pastor Jesse Meduna officiating the service. Music was provided by Kristen Meduna. Special music selections were, “Old Rugged Cross,” “I Know Who Holds Tomorrow,” “It Is No Secret,” and “Ten Thousand Reasons” (Bless The Lord). Inurment was held at the Fort McPherson National Cemetery at Maxwell, Nebraska on October 15, 2018. Hoch Funeral Home of Ainsworth assisted with the arrangements.

Wanda Rasmussen passed away on October 8, 2018 at the age of 89 years at home near Springview. She went to her heavenly home on her birthday. She was born on October 8, 1929 in Norden, Nebraska, to Clyde and Dorothy (Spraggins) Vaughan. Norden... View Obituary & Service Information

The family of Mrs. Wanda June Rasmussen created this Life Tributes page to make it easy to share your memories.