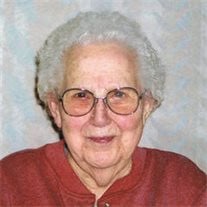 Getha Wave (Monroe) Cook-Swanson was born on October 24, 1918 to Albert and Coral (Painter) Monroe at Springview, Nebraska. She was the older of two girls. Getha passed away on August 14, 2013 at the Rock County Long Term. Getha attended rural grade school and several years of high school in Keya Paha County and was working for Ward and Lois Painter in the Mills area when she met Gordon Cook. Gordon had cattle on the Painter place and having taken an interest in Getha, felt the need to check his cattle more often. The couple eloped to Lake Andes, South Dakota on January 1, 1939, only to find the courthouse closed. They made a return trip on January 3rd and were married before a judge. Their marriage remained a secret from their families for 3 months. Gordon purchased their Keya Paha County farm in 1939 and he and Getha made their home there until their retirement. They were married for over 42 years when Gordon passed away in April, 1981. Getha received the Lord as her Savior in the 1950's. She was listening to Back to the Bible Broadcast when Dr. Theodore Epp said, "You may be doing dishes at your sink (she was) – just kneel down and invite Him into your heart" and she did. It was her burden to see her family saved. One by one, each of her family became believers in Jesus Christ. Gordon trusted Christ in 1971 and his comment was, "things look so different – why did I wait so long?" After Gordon's passing she married Leonard Swanson at Chambers, Nebraska. They were married nearly fifteen years before he passed away in 1996. After his passing, Getha remained in Chambers for a year before moving to Bassett. She enjoyed her little house and her neighbors before entering the Long Term Care in 2006. Getha is survived by her children, Harold (Dorothy) Cook of Central City, Nebraska, Barbara (John) Regier of Colorado Springs, Colorado and Stanley (Patsy) Cook of Springview; daughters-in-law, Judy (Jim) Tarpley of Madison, South Dakota and Diana Haller of Pierce, Nebraska; 14 grandchildren, 48 great grandchildren , 4 great great-grandchildren, step children, Donald (Mary) Swanson of Newport, Nebraska and Loretta (Lee) Muhr of Gering, Nebraska; step daughters-in-law, Patty Swanson, Farwell, Nebraska and Judy Swanson, Hartington, Nebraska; 14 step grandchildren and 36 step great-grandchildren. She was preceded in death by her parents, first husband Gordon, two sons Duaine and Dale, a great granddaughter, her sister and brother-in-law Dolores and Ivan Minshall, her second husband, Leonard, two step sons Larry and Robert and a step grandson. Graveside Services were held on August 17, 2013 at 2:00 PM at the Mt. Hope Cemetery in Springview, Nebraska. Pastor Sam Courts officiated over the service. Music was provided by Pastor Sam and Mary Courts. Pallbearers were all of Getha's Grandsons and Step-Grandsons. Hoch Funeral Home of Ainsworth was in charge of the arrangements. Memorials were directed to the "Back to the Bible" Radio Broadcast.

Getha Wave (Monroe) Cook-Swanson was born on October 24, 1918 to Albert and Coral (Painter) Monroe at Springview, Nebraska. She was the older of two girls. Getha passed away on August 14, 2013 at the Rock County Long Term. Getha attended... View Obituary & Service Information

The family of Mrs. Getha W. (Monroe) Cook-Swanson created this Life Tributes page to make it easy to share your memories.