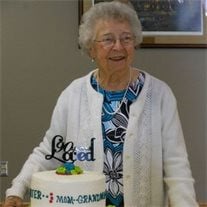 On March 8, 2018 Vivien Darlene Johnson, daughter of Max and Alice (Esterly) Rauscher, was called home to Heaven by her Lord and Savior Jesus Christ. Vivien was born on March 3, 1927 and was raised on a farm northwest of Ainsworth. She was a baptized and confirmed member of the Lutheran Church. Vivien attended District 8 Rural School, Johnstown and Ainsworth High School, graduating in 1945. She taught Highland Grove School for one year. On December 8, 1946 Vivien and Err Johnson were united in marriage at St. Paul's Lutheran Church in Ainsworth, Nebraska. Together, Err and Vivien purchased their own farm and raised three children; Daniel, Patricia, and Brian. Vivien kept busy, not only raising her family, but also in the church and community. She was a lifetime member of the Lutheran Church and an active member of Dorcas and LWML. She was a faithful Sunday School and VBS teacher, a 4-H leader, and a member of Home Band. For many years she participated in the Brown County Fair activities by helping with the BBQ meals and as Superintendent of the Flowers. One of Vivien's favorite pastimes was playing cards, whether it was with friends or family. Many memories were made around the card table! Vivien loved working for the Lord, gardening, crocheting, cooking, baking, and last but not least, she loved being with her family, and her family loved being with her. She was a warm gentle soul. Vivien was preceded in death by her parents, her spouse, Err, in 1996, and all of her siblings, Maxine, Carl, lone, and Neola. She is survived by her three children and their spouses, Daniel (Linda) Johnson of Ainsworth, Nebraska, Patricia (Myron) Wasson of Hadar, Nebraska, and Brian (Donna) Johnson of Ainsworth. 10 grandchildren, and 19 great-grandchildren. Brothers-in-law, Brent (Karen) Johnson of Johnstown, Bruce (Jeane) Johnson of Ainsworth. Sister-in-law, June Biggs of Quincy, California. Numerous nieces and nephews as well as her dear companion and friend Bruce Botsford of Ainsworth. Funeral Services were held on Monday, March 12, 2018 at the Zion Lutheran Church in Ainsworth with Pastor Georg Williams officiating. Music was provided by Georgia Williams with the congregation singing "I'm But A Stranger" and "Just As I Am Without One Plea." Casketbearers were: Thad Wasson, Toby Wasson, Tom Shirley, Scott Johnson, Ethan Johnson, Jeff Lundval and Cody Molacek. Honorary Casketbearers were: All of Vivien's Other Grandchildren and Great-Grandchildren. Memorials were to be made to the Zion Lutheran Church Flower Fund or the Eye Macular Degeneration Foundation in Vivien's name. Interment was in the East Woodlawn Cemetery at Johnstown, Nebraska under the direction of the Hoch Funeral Home of Ainsworth.

On March 8, 2018 Vivien Darlene Johnson, daughter of Max and Alice (Esterly) Rauscher, was called home to Heaven by her Lord and Savior Jesus Christ. Vivien was born on March 3, 1927 and was raised on a farm northwest of Ainsworth. She was a... View Obituary & Service Information

The family of Mrs. Vivien D. (Rauscher) Johnson created this Life Tributes page to make it easy to share your memories.