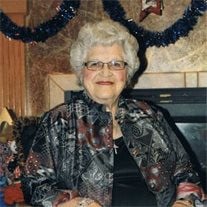 Vivian Lula Jeanette (Reinert) Alberts was born on November 22, 1922 to Lillian and Arthur Reinert on a small place northwest of Ainsworth, Nebraska. From there they moved north of Ainsworth and lived there until 1925. When Arthur passed away Doris & Vivian moved to Ainsworth, and lived with their Grandmother, Anna Lockmiller, and started kindergarten, attending up to third grade, they then moved to Chadron, Nebraska to be with their mother. From there, they moved to Crawford, Nebraska, leaving there in 1929. Lillian, and Vivian's step-father Otto, along with her sister, Doris, step-sister, Dorothy Gerhardine, and step-brother, Waldo, all then moved back to Ainsworth. Vivian went to school District #8, completing the eighth grade. In 1939, Vivian met Kenneth J. Alberts and on October 12, 1941, they were married. To this union, two sons were born, Jerry and Robert, as well as two daughters, Sheila and Karen. They lived northwest of Ainsworth and ranched until 1943 and then moved to Brookings, South Dakota until 1951, moving back to Ainsworth, living 5 miles south of town on the Alberts ranch, taking over the farming operation. Vivian and Kenneth continued on the ranch raising their four children. In 1988 they retired & moved to an acreage on the edge of Ainsworth. In October of 2005, Vivian broke her hip, and with declining health, she and Kenneth both moved to Cherry Hills Estate at Valentine, Nebraska to be close to their daughter Sheila Witt. Kenneth passed away on September 12, of 2011. Vivian remained at Cherry Hills until May of 2015, at which time she then moved to Rock County Long Term Care in Bassett, Nebraska where she resided until her passing on August 6, 2015. Vivian is preceded in death by her parents; husband, Kenneth; son, Jerry; sister, Doris, Step-sister Dorothy and stepbrother, Waldo; granddaughter, Peggy Marie Alberts, and a great-grandson, Tyler Davenport. Vivian leaves to mourn her passing her 3 children; Sheila (Bob) Witt of Valentine, Nebraska, Karen (Bill) Spanel of Burwell, Nebraska, and Bob (Janet) Alberts of Long Pine, Nebraska; Daughter-in-law, Geraldine Alberts, along with numerous grandchildren, great-grandchildren, and great-great-grandchildren. Graveside services were held at the Ainsworth Cemetery in Ainsworth, Nebraska under the direction of Hoch Funeral Home in Ainsworth. Pastor David Randall officiated the service. Honorary bearers were all of Vivian's Grandchildren, Great-Grandchildren and Great-Great-Grandchildren. Memorials were suggested to the Brown County Ag Society.

Vivian Lula Jeanette (Reinert) Alberts was born on November 22, 1922 to Lillian and Arthur Reinert on a small place northwest of Ainsworth, Nebraska. From there they moved north of Ainsworth and lived there until 1925. When Arthur passed away... View Obituary & Service Information

The family of Mrs. Vivian L. (Reinert) Alberts created this Life Tributes page to make it easy to share your memories.