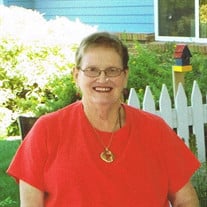 On July 3, 1939 Virginia “Jenny” LaRue Skinner was born to Edith and Wesley Skinner in Lawton, Oklahoma. When she was four years old, Edith married Chester Wright. She was the oldest of four siblings; sister, Sadona Dale, brother, James Darrell and other sister, Marion Joyce. She grew up being an army brat living in several locations including three years in Germany. She moved to El Paso in 1953. In 1954, they moved back to Lawton, Oklahoma where she graduated from high school in 1957. On May 3 1958, Jenny married Glenn “Manny” Osborn, and to this union five children were born: daughter, Glenda, and sons, Marty, James, Tom, and Chuck. She was a homemaker until the mid 1970’s, when they started their Osborn Plumbing business where she was the secretary. She later went on to work at the Bethesda Care Center and later retired as the Activity Director there. She loved working there and enjoyed visiting with all the residents and doing all sorts of different activities. After retiring, Jenny kept busy by spending endless hours with grandchildren, friends and family. She loved playing SkipBo, dominoes, and enjoyed having a Diet Dr. Pepper at the Pizza Hut with her friends. This past year-and-a-half, she loved living at Cottonwood Villa where she gained a second family with the residents and staff. She passed away at the age of 79 years on November 23, 2018 peacefully with family by her side at her home at the Cottonwood Villa. Jenny was preceded in death by her mother, Edith Wright; stepfather, Chester Wright; father, Wesley Skinner; and many other loved ones. She will forever be in the hearts of children, Glenda Mason and husband, Scott of Grand Island, Marty Osborn and wife, Lori of Beaver, Oklahoma, James Osborn, and Tom Osborn and wife, Tiffany and Chuck Osborn and wife, Jennifer, all of Ainsworth; ten grandchildren and 14 great-grandchildren. She is also survived by her sisters, Dale Vanover and husband, Gerald of Oklahoma City, Oklahoma, and Marion Wright of Ashford Alabama and brother, Jim Wright and wife, Carolyn also of Ashford, Alabama, along with nieces, nephews other family members and many, many friends. Jenny will always be remembered for her strong faith. Not only did her own children and grandchildren call her Mom and Grandma, but many of their friends came to know her as the same. Funeral Services were held on Wednesday, November 28, 2018 at the Ainsworth Assembly of God Church with Pastors Gary Graesser and Bruce Beebout officiating. Music was provided by Dortha McGill with the special CD selections of “It Is No Secret What God Can Do” by Elvis Presley, “Amazing Grace” by Alan Jackson, “Go Rest High On That Mountain” by Vince Gill, and “I Can Only Imagine” by Mercy Me. Casketbearers were: Shawn Johnson, Ryan Cleal, Bryan Murphy, Bart Waits, Pat Lentz and Brian Klatt. Honorary Casketbearers were: All of Jenny’s Other Friends and Family. Memorials were suggested to the family in her name for future designation. Burial was in the Ainsworth Cemetery under the direction of the Hoch Funeral Home in Ainsworth.

The family of Ms. Virginia L. "Jenny" Osborn created this Life Tributes page to make it easy to share your memories.