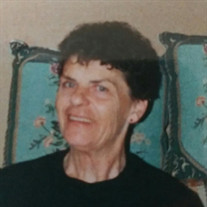 Virginia Marie Lewis was born on January 26th, 1939 in Anselmo, Nebraska to Claude M. and Pearle I. (Doman) Cooley. She passed away Wednesday, June 13, 2018 at the Rock County Hospital Long Term Care Facility in Bassett at the age of 79 years, four months and 19 days. Virginia grew up in rural Custer County and attended school in Brewster, Nebraska. After high school she met the love of her life, Clarence C. Lewis and they were united in marriage on June 7th, 1959. They made their home south of Ainsworth, Nebraska on a ranch and adopted Barry T. Lewis in 1964. They later moved to their permanent home in Long Pine, Nebraska. Virginia was employed at both the Brown County Hospital and Ainsworth Care Center throughout most of her life and finally retired in her early 70’s. She was an active member of the Parkside Berean Church in Ainsworth and also a member of The American Legion Auxiliary of Long Pine. She had a serving heart and hard-working hands that were always willing to help her family, friends and her local communities. In her free time, she enjoyed spending time with her grandchildren Dessa and B.j., and family and friends. Taking care of her chicken coop, gardening, sewing, baking, which included the best homemade peanut butter fudge you ever did eat and making pancakes bigger than your plate. She also enjoyed reading books, especially romance novels and her Bible and daily devotionals. She was a virtuous woman who honored God and devoted her life to him every day. Constantly pursuing a closer relationship with him through prayer and devotion and attending church regularly. She lived by the words of the Bible and always handled everything in life with grace and prayer. It showed through her character, morals, hard work ethic, humble and modest ways of living, selfless acts of kindness, generosity, unconditional love, and moral support as well as forgiveness to everyone. Virginia was preceded in death by her parents, Claude and Pearl Cooley; her husband, Clarence C. Lewis; her five sisters, Viola Anderson, Jeane Thiel, Dorothy Jochem, and Irene Daily; and three brothers, Allen Cooley, Paul Cooley and Clarence Cooley. Surviving family members include her son, Barry T. Lewis of Bassett, Nebraska; three grandchildren; six great-grandchildren; a sister, Judy R. Fitch of Valley Center, Kansas; along with nieces, nephews and other family members. Proverbs 31:29 - “Many women do noble things, but you surpass them all.”

Virginia Marie Lewis was born on January 26th, 1939 in Anselmo, Nebraska to Claude M. and Pearle I. (Doman) Cooley. She passed away Wednesday, June 13, 2018 at the Rock County Hospital Long Term Care Facility in Bassett at the age of 79 years,... View Obituary & Service Information

The family of Mrs Virginia M Lewis created this Life Tributes page to make it easy to share your memories.