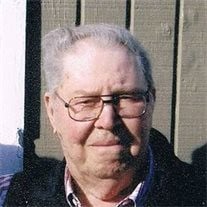 Virgil D. Larson, age 86, was called to be with the Lord on May 2, 2014 at Atkinson, Nebraska. He was born on a farm northeast of Creighton, Nebraska on August 19, 1927 to Conrad and Anna (Siemsen) Larson. At the age of three, Virgil and his family moved to the Bloomfield, Nebraska area where in 1944, he graduated from Bloomfield High School. He continued his education graduating from Boyles College in Omaha, Nebraska. He then entered into the military serving in the Army Air Corps from 1946-1947. When returning home, Virgil started the Prairie Ramblers Horse Club where he was a leader. On November 18, 1952 at St. Andrews Catholic Church at Bloomfield, Virgil married the love of his life, Denelda Bruns. Together they made their home on a farm near Bloomfield and to this union, four children were born: Blain, Dixie, Dawn and Brian. At Sparta, Nebraska, Virgil was very active in the 4-H Club called the Sparta Sparklers where he served as a leader for many years. In 1967, they decided to leave the farm, had an auction and Virgil started a career with the Nebraska Game and Parks Commission in the Wildlife Division at Bloomfield, serving at Lewis and Clark Lake before being transferred to Plattsmouth, Nebraska and finally to Bassett, Nebraska in 1971, making it their home. Virgil loved all the work with the animals and cherished all the time he spent outdoors. Following his years of work at the Game Commission, he was employed by the USDA. After his retirement, he delivered lunches at the Newport Grade School. Virgil was presently a member of American Legion Post #259 of Verdigre, Nebraska. He also was a member of Holy Cross Catholic Church of Bassett. Virgil enjoyed spending time with his family-they always came first. He loved restoring old tractors and cars and participating in car shows with his much loved '68 Ford Mustang. Gardening and yard work were his passion. He will be dearly missed. Virgil was preceded in death by his parents, Conrad and Anna Larson; sister, Fern Larson; brother, Vern Larson and his wife; father-in-law, Anton Bruns; mother-in-law, Marie Bruns; and a grandson, Trent Larson. Virgil is survived by his wife, Denelda of Bassett; son, Blain Larson and special friend, Cindy Svoboda of Schuyler, Nebraska, Dixie DeBolt and husband, Gene of Newport, Nebraska, daughter, Dawn Dorsey and husband, Warren of Ainsworth, Nebraska, and son, Brian Larson and wife, Lucia of Rose Valley, Pennsylvania; a special cousin, Bob Larson and wife, Bev of O'Neill, Nebraska along with eleven grandchildren and 16 great-grandchildren and nieces and nephews and other family members. Funeral Services were held on Monday, May 5, 2014 at 10:00 AM at the Holy Cross Catholic Church in Bassett, Nebraska with Father Jim Heithoff as Celebrant. Music was provided by Trudy Nolles, Kara Bruns, Paige Bruns, and Katie Nolles with music selections of "Amazing Grace" and "The Old Rugged Cross." The CD selections recorded by Barb Assarsson of "I Want Us To Be Together In Heaven" and "Before The Roses Bloom Again" were played. Pallbearers were: Matt Larson, Jason Feximer, Jason Tracy, Jim Ward, Matt Severson, Nick Klabenes, Joe Caufield, Miles Dorsey and Daniel Larson. Honorary Pallbearers were: Amber Feximer, Tara Tracy, Micki Ward, Keri Severson, Brooke DeBolt, Kelli Klabenes, Bradee Caulfield, Gloria Larson, along with all of Virgil's close family and friends. Gravside Services were held Monday afternoon at 2:00 PM in the St. Wenceslaus Cemetery at Verdigre, Nebraska with Father Kizito R. Okhuoya as Celebrant. Military Honors were conducted by the Verdigre American Legion Post #259. A Rosary Service was held on Sunday evening at the Catholic Church in Bassett. Memorials were suggested to the family in Virgil's name. Hoch Funeral Home of Bassett was in charge of the arrangements.

Virgil D. Larson, age 86, was called to be with the Lord on May 2, 2014 at Atkinson, Nebraska. He was born on a farm northeast of Creighton, Nebraska on August 19, 1927 to Conrad and Anna (Siemsen) Larson. At the age of three, Virgil and his... View Obituary & Service Information

The family of Mr. Virgil D. Larson created this Life Tributes page to make it easy to share your memories.