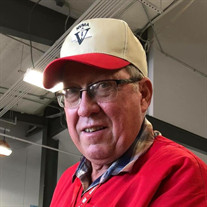 Vergil Allen Heyer, DVM, age 65, of Ainsworth, Nebraska, passed away due to injuries sustained in an accident on Dec. 8, 2020, near Cozad. He was born Feb. 16, 1955, in Sioux City, Iowa, to Vergil Albert and Jackie (Hayes) Heyer of Cushing, Iowa. He was the oldest of six children, having four brothers and one sister. Vergil graduated from the Iowa State University College of Veterinary Medicine in 1980. After graduating from veterinary school, Vergil began his practice in Coleridge, Nebraska. On Aug. 7, 1982, Vergil married Lynne (Maylahn) Heyer in Skokie, Illinois. The pair had two children, Saige and Vance, and one granddaughter, Natalie. In 1988, Vergil and Lynne moved to Ainsworth, Nebraska, where he began work at the Ainsworth Veterinary Clinic, practicing as a primarily large animal veterinarian until he retired. Vergil was a worker, taking on a second career in retirement driving truck. Above all, he enjoyed traveling and visiting family and friends. Vergil loved seeing new places, often visiting guest ranches to work in different sceneries. He cherished the relationships he built over the years working with members of the community through the vet clinic, raising cattle, staying at guest ranches, and driving truck. Vergil was an active member of the veterinary community serving in various offices for the Nebraska Veterinary Medicine Association. Accomplishments of his membership include working the birthing pavilion at the state fair each year and helping the interview committee at the Iowa State University and University of Nebraska joint veterinary school program. Locally, Vergil was a member of Zion Lutheran Church, Elks Lodge #1790, and the Ainsworth Lions Club. Vergil is preceded in death by his wife Lynne. Survivors include parents Vergil and Jackie Heyer of Cushing, Iowa; daughter, Saige, and granddaughter, Natalie of Schaumburg, Illinois; son, Vance, of Ainsworth, Nebraska; brothers, Verle of Coraopolis, Pennsylvania, Vincent of Eldridge, Iowa, Vern of Franklin, Tennessee, and Vaughn of Cushing, Iowa; sister, Mae Jean of Mount Horeb, Wisconsin; significant other Sue Kenny of Schaller, Iowa; brothers-in-law, sisters-in-law, nieces, nephews, and many other friends and family. Funeral Services were held on Friday, December 11, 2020, at the Zion Lutheran Church in Ainsworth with Pastor Georg Williams officiating at the service. Music was provided by Georgia Williams, with the congregation singing “I’m But A Stranger Here” and “Amazing Grace.” A vocal selection sung by Pastor Georg Williams was “Old Rugged Cross.” Casketbearers were: Vern Heyer, Vaughn Heyer, Jimmy Jackman, Kent Christensen, Rich Hurless and Mark Johnson. Honorary Casketbearers were: All of Vergil’s other family and friends. Memorials were suggested to the family in Vergil’s name for a future designation. Interment was in the Lutheran Church Cemetery near Ainsworth under the direction of the Hoch Funeral Home of Ainsworth. Online condolences may be left for the family at www.hochfuneralhome.com.

Vergil Allen Heyer, DVM, age 65, of Ainsworth, Nebraska, passed away due to injuries sustained in an accident on Dec. 8, 2020, near Cozad. He was born Feb. 16, 1955, in Sioux City, Iowa, to Vergil Albert and Jackie (Hayes) Heyer of Cushing,... View Obituary & Service Information

The family of Vergil Allen Heyer D.V.M. created this Life Tributes page to make it easy to share your memories.