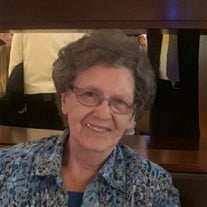 Vera Maxine Dinkins was born to Lee and Hattie (Peterson) Dinkins on July 3, 1931 at Tekamah, Nebraska. She passed into eternity on December 24, 2020 at her home surrounded by family. Vera’s childhood was spent in the Tekamah area where she attended elementary school in her local rural district and in Tekamah Public School. In 1945 at the age of 14, her family moved to Atkinson, Nebraska where she attended 9th grade. Vera completed her high school education in Springview at Keya Paha County High School, graduating with the class of 1949. Vera married Glen Schrantz, a young man that she had met several months earlier, on September 12, 1948 in a private ceremony at the Methodist parsonage in Ainsworth. They lived in Springview until the spring of 1950 when they moved to Ainsworth where she worked in the local “dime” store. They moved back to Springview in the spring of 1951 where they lived the rest of their lives. The next years of their lives were very busy with the birth of their children and all the work and activity that went with that. They had seven children with one son dying shortly after birth and another passing away at the age of 12. Vera was involved in her children’s activities. She was an assistant 4-H leader, and spent thousands of hours helping her children with their 4-H projects. She taught her daughters to sew, cook and bake. Her efforts are still yielding results in the lives of her children. Vera was an accomplished seamstress. Her daughters always wore beautiful homemade dresses. As her daughters got older, she sewed beautiful prom dresses for them, and as each daughter got married, she sewed a beautiful wedding dress for each of them. She also spent hours sewing Barbie doll clothes for the girls. In later years she took up crocheting, making afghans for family members, keepsakes they will always remember. Vera loved card games and board games, especially Aggravation. For being such a mild-mannered woman, she became extremely competitive when the Aggravation board came out, delighting in beating anyone who got in her path. And if she was winning, she was giggling! Her happiest moments were the times when family was around. She loved to plan big holiday get-togethers, and even last Christmas hosted a huge family Christmas Eve. When she received her diagnosis of cancer, she refused treatment and said she just wanted to go home and be with her family. This involved setting up hospice care so she could be in her home where she could see family, a labor of love that her children will be forever thankful they made. At the center of Vera’s life was her service to her Savior, which was evident in her gentle, loving and kind spirit. She was faithful in her church attendance and was a prayer warrior that you could always count on. She spent many hours in prayer for her family. Because of her prayers, each child has come into the saving knowledge of Jesus Christ. And, as a result of unceasing prayer, her husband also came to know Christ a few months before his death. Her legacy of love, faithfulness and prayer will live on for many generations to come. After the kids left home, Vera found more time for her own activities. One activity she enjoyed was the Red Hat Society. She enjoyed the ladies in her group and all the places they visited and activities they took part in. She was also a faithful servant in the church, always willing to help with projects or provide food for events. She also loved to travel and took several notable trips. She made several trips to Illinois where she enjoyed time with her sisters and trips to Michigan where she visited her daughter, Connie. She was able to make a trip to New England to view the fall colors in 2018 and a trip to Las Vegas and attractions in that area in 2019. Vera always felt that her contributions to life were minimal as she was “just a stay at home mom”. In reality she fulfilled a very high calling: loyal daughter, faithful wife and loving mother. Vera was preceded in death by her parents, Lee and Hattie Dinkins, her parents-in-law, Alvin and Anna Schrantz, her husband of nearly 67 years, Glen in 2015, a son Wayne in 1960 and a son Gary in 1969, and her sister Mary Lou Johnson. Those who remain and are grateful for her love and influence in their lives are her five children: Sandi (Mike) McCoy of Springview, Connie (Tracy) Nemecek of Charlevoix, Michigan, Patsy (Stan) Cook of Springview, Russell (Kayla) Schrantz of Springview and Nancy (Stan) Boltz of Huron, South Dakota. She also loved and prayed for her 10 grandchildren: Heather (Lance) Hespe, April (Bobby) Shaw, Michael (Sarah) McCoy, Teri (Michael) Schnieder, Troy (Eileen) Cook, Shelly (CJ) Strand, Brittany (Turee) Benson, Breanna (Dusty) Foth, Zachary (Summer) Boltz, and Jessica Boltz. She also leaves to cherish her memory 24 great grandchildren and 4 great-great grandsons. Also surviving are one sister, Shirley Clark of Rockford, Illinois and one sister-in-law, Joan Schrantz of Sarasota, Florida, nieces, nephews and many friends. Funeral Services were held on Tuesday, December 29, 2020 at the New Hope Community Church in Springview. Pastor Tim Wyrick officiated at the service. Music was provided by Elaine Fling. CD music selections played were “Amazing Grace (My Chains Are Gone)”, by Chris Tomlin and “Untitled Hymn (Come To Jesus)”, by Chris Rice. Casket Bearers were: Troy Cook, C.J. Strand, Dusty Foth, Zachary Boltz, Michael McCoy and Turee Benson. Honorary Casket Bearers: All of Vera’s other Grandchildren, Great-Grandchildren and Great-Great Grandsons. Memorials were suggested AseraCare Hospice in Vera’s name. Arrangements were under the direction of the Hoch Funeral Home of Ainsworth.

Vera Maxine Dinkins was born to Lee and Hattie (Peterson) Dinkins on July 3, 1931 at Tekamah, Nebraska. She passed into eternity on December 24, 2020 at her home surrounded by family. Vera&#8217;s childhood was spent in the Tekamah area where... View Obituary & Service Information

The family of Vera M. (Dinkins) Schrantz created this Life Tributes page to make it easy to share your memories.