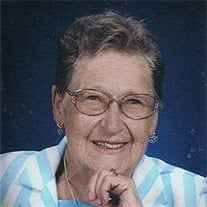 Vera Leona Potratz was born June 14, 1924 to Arthur F. and Celia S (Burgett) Potratz in Bassett, Nebraska. She was the third daughter with older sisters Marie and Evelyn. Another daughter, Donna Mae died at 2 months of age. The family lived in the Bassett area where a 4th daughter, Wilma joined the family. The family lived in several locations during Vera's elementary school period. They moved to southeast Missouri in 1936, but only lived there for a short time. Vera attended high school at Rock County High, participating in the American Legion Drum and Bugle Corp, band, Glee Club. Vera loved to dance and it was at a dance that she met the love of her life, Frank Jilg in 1940. Vera graduated from Rock County High School in 1942, during WWII. She began working for Dr. Harold and Veta Panzer, caring for their children. They taught Vera to be a nurse's aide, a work that she loved. Vera and Frank were married on May 22, 1944 at Sacred Heart Catholic Church rectory and Vera joined Frank on the family ranch south of Newport, first living in with Frank's parents until they could build a house of their own in November 1944. Their first daughter, Mary Anne was born February 11 1946. Mary Anne died on November 14 1947 at the age of 20 months. Dennis Eugene was born January 10, 1948, followed by Douglas Kent on February 14, 1950. Veta Kay joined the family on July 29, 1951, followed by Mark Franklin on August 19, 1953. Even though Vera had no experience on a ranch, she grew to love ranch life, especially the cattle. She loved seeing the newborn calves. Frank and Vera spent many hours working with their children and others in the community by providing leadership through 4-H and many school activities. Frank and Vera made a huge sacrifice in the fall of 1965, with Vera moving to Bassett to send the three older kids to high school, with Mark soon joining them in elementary school in Bassett. Frank stayed on the ranch with the family returning to the ranch on weekends. The Jilg house soon began the gathering place for teenage kids to hang out, with parents always being confident that they were being chaperoned. It has been said that Vera popped literally tons of popcorn for the kids. She could always find enough space and food for any teenager that needed a place to land. It was during this time that the teenagers adopted Vera as their honorary "Mom". She was always available to offer support and guidance, even a good scolding when needed. Vera returned to the ranch full time after Mark graduated from high school in 1972, much to her relief and joy to be back on the ranch. Frank & Vera moved into Bassett in 1987 and once again, her house was a gathering place for teenagers, this time it was her grandchildren and their friends. Everyone always knew that her door was open and she would find food from her well stocked pantry to feed them. Vera had enjoyed her children, but she found even greater joy with her grandchildren, watching them grow to adulthood and bringing great grandchildren into the family. She was the happiest when snuggling with the next new baby. Vera faithfully spent every day with Frank after he entered Rock County Long Term Care following a stroke. She was devoted to him until the time of his death on February 1, 2003. After battling health issues at home, Vera entered the Rock County Hospital Custodial in September 2009 and Vera added more people to her family; this time it was the staff. While in the facility, Vera planted and cared for her garden, donating produce to the residents in Long Term Care and anyone else she thought might need vegetables. The legacy Vera leaves is her love of people and her strong faith. Even if she disagreed with you, she accepted and loved you. Even while suffering with pain and illness her strong faith never failed her. She always had a smile and words of encouragement for others. Vera was truly the family "prayer warrior". Vera was preceded in death by her parents, sisters, Marie, Evelyn and Wilma, Donna Mae and brothers-in-law, sister-in-law, Kathleen and husband, daughter Mary Anne and daughter –in-law, Sue. Surviving Vera are Dennis & wife Barb Jilg, Doug & wife Carol Jilg, Veta & Bruce Hungerford and Mark Jilg. She is also survived by 11 grandchildren, Kristopher Jilg, Stephanie Kohlhof, Tad Jilg, Jason Jilg, Alissa Millsap, Michael Jilg, Mari Lubberstedt, Sheila Abler, Daniel Jilg, Jacob Jilg, and Thomas Jilg and 18 great grandchildren, as well as many friends. A Wake and Rosary service was held on Wednesday, March 11, 2015 at the Holy Cross Catholic Church in Bassett, Nebraska. Funeral services were then held at the church on Thursday morning. Serving as celebrants were, Father Phil Flott and Father Lou Nollette. Marilyn Lund served as Lector. Ministers of the Eucharist were Homer and Dan Buell. Casket bearers were, Dennis and Barb Jilg, Doug and Carol Jilg, Veta and Bruce Hungerford, and Mark Jilg. Honorary bearers were Mari Lubberstedt, Kristopher Jilg, Alissa Millsap, Sheila Abler, Jason Jilg, Stephanie Kohlhof, Tad Jilg, Daniel Jilg, Michael Jilg, Jacob Jilg and Thomas Jilg. Music was provided by Trudy Nolles and Dave Sybrant. Music Selections were, "On Eagle's Wings", "Be Not Afraid", and "Old Rugged Cross." A CD selection of "High Above The Clouds" was also provided. Interment was held at the Bassett Memorial Park Cemetery under the direction of Hoch Funeral Home. In lieu of flowers, memorials were directed to the Rock County Hospital Auxiliary, the Bassett American Legion Auxiliary, the Holy Cross Catholic Altar Society or to the Donor's Choice.

The family of Vera L. (Potratz) Jilg created this Life Tributes page to make it easy to share your memories.