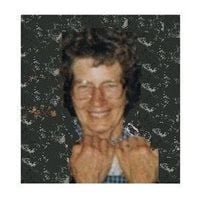 On March 7th, 1924, Velda Eloise Fletcher was born to Harry and Pearle (Bowen) Fletcher at Sargent Nebraska, and passed away on December 3rd, 2014 at the Rock County Hospital in Bassett, Nebraska. Velda had three sisters, Vera, Mic and Darlene, and one brother, Darrold. Early in her life, Velda told her parents that she did not like her name and to call her "Judy" and the name stuck. Judy had a good childhood growing up in the country. She was a very active girl. She did not like to set around and "do nothing", so she always had to keep busy. She loved being outdoors and would do anything, as long as it was outside, (mainly if it involved riding horses, she loved riding horses.) Judy also liked to go to dances. There was almost always a dance at Cottonwood Dance Hall or the Raven Dance Hall. She tells many stories about how she and her sister Mic would try to steal each other boyfriends at these dances. At one of these dances, she met William Crist or "Bill" as everyone knew him. After dating for awhile, the two were married on June 15th, 1945 at Ainsworth. Nebraska. To this unit two children were born, Julie Ann and William. "Willie" Harry. Judy and Bill lived at Diamond Lake. They loved to go fishing however Judy did not like to eat fish, but would clean the fish because she knew her husband liked them. One ice- fishing trip, she caught a 71b Big Mouth Bass and proudly shows it off to this day. Judy was a loving and hard working mother. She raised a big garden and did a lot of canning to feed her family through the winter months. The kids remember how much food was stored in the cellar of their house. She always had time to raise a big flower bed. Later, Judy got a job working in the Ainsworth Nursing Home. In 1967, the family moved to a ranch outside of Bassett, Judy got a job in the old Rock County Nursing Home. When she talked about some of the residents behaviors it would make her laugh. She would say, "you couldn't help but love those people." As years went by, she held and loved eight grandkids, one step-grandson, 25 great-grandkids and four great-great grandkids. Judy was a hard working lady even into her 80's she was still cutting all of her own wood. (You had to see the large amount of wood she had every year in her barn.) They might not have been big pieces, but there were a lot of them. She was a tough lady, not taking "NO" for an answer, (the one thing about Judy, you never told her she "could NOT do something", because she would do ANYTHING to prove you wrong!) In 2007, she was told not to remove the big branches that had fallen due to an ice storm months before. She not only brought a big branch down, but she brought it down on top of herself! She had punctured both of her lungs and damaged her back so badly that the Dr. said she would not make it through this. Not only did she make it through that, but when she was "healed up", she got her chain saw out and cut more wood! A few years later, she broke her ankle and refused to have a cast on it. She used a walker and put Bengay on it. (Walked better than most of us!) You have to hand it to Judy she was a very kind and strong lady. She is preceded in death by her parents, brother, three sisters and on grandson, Cody. Judy is survived by her two children, Julie McDaniel of Ainsworth, and Willie Crist and wife Linda of Bassett, her grandkids, great-grandkids, and great-great-grandkids, along with nieces and nephews. She had a blessed life, loving parents, loving husband, and loving children. May God bless her. Graveside services were held on Saturday, December 6, 2014 at 10:30 AM at the Ainsworth Cemetery with Pastor Georg Williams officiating the service. Arrangements were under the direction of Hoch Funeral Home of Ainsworth, Nebraska. Memorials were suggested to the donor's choice.

On March 7th, 1924, Velda Eloise Fletcher was born to Harry and Pearle (Bowen) Fletcher at Sargent Nebraska, and passed away on December 3rd, 2014 at the Rock County Hospital in Bassett, Nebraska. Velda had three sisters, Vera, Mic and Darlene,... View Obituary & Service Information

The family of Mrs. Velda E. "Judy" (Fletcher) Crist created this Life Tributes page to make it easy to share your memories.