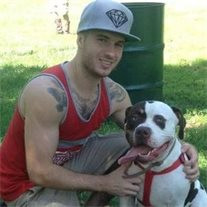 Tyler Jaye Walton was born on September 28, 1992 in Valentine, Nebraska to Bob and Carol Walton of Ainsworth, Nebraska. Tyler's life was taken on June 20, 2015 at the Monarch in Lincoln, Nebraska. Tyler played many sports during his school years. He excelled in wrestling, qualifying for state twice and placing 4th his senior year. He graduated from Ainsworth High School in 2011. Upon graduation, Tyler moved to Lincoln with his girlfriend Sami. He began studying graphic design at Southeast Community College, while working at Four Season Landscaping and later, Custom Countertops. Tyler's life experiences and journeys inspired him to want to help others and began pursuing career in counseling. Tyler enjoyed body art, working out, jet skiing, and above all spending time with his girlfriend Sami and their dog Rosco, as well as friends and family. Tyler was an exceptional artist. He expressed his passions and love for family and friends through his artwork and tattoos. Tyler is survived by his parents, Bob and Carol Walton of Ainsworth; Grandmother, Donna Rezac of Ainsworth; brothers, Jade Walton of Chicago, Illinois and Matt Walton of Lincoln; sister, Erin Robinson (Draper) of San Antonio, Texas, and many aunts, uncles, cousins, and friends. Tyler is preceded in death by his grandparents, Woodrow Rezac, Edna Schmeichel, Harry Walton, and Bill Leibert. He was also preceded in death by his significant other of 6 years, Samantha Jo Everett. Tyler touched so many people's lives and will be truly missed by us all. Donations received will be given to E&L Baseball, Ainsworth Wresting Club, and Houses of Hope. Memorial services were held on Thursday, June 25, 2015 at the McAndrew Gymnasium in Ainsworth, Nebraska with Pastor Bruce Beebout and Pastor Mick Thornton officiating the service. Special remarks were given by Andrew Genzmer, and Jade Walton read the obituary. Bearers were, April Everett, Matthew Walton, and Maggie Everett. Honorary bearers were, all of Tyler's other family and friends and Houses of Hope Family. Inurnment was held at the Woodlawn Cemetery in Atkinson, Nebraska under the direction of Hoch Funeral Home of Ainsworth.

Tyler Jaye Walton was born on September 28, 1992 in Valentine, Nebraska to Bob and Carol Walton of Ainsworth, Nebraska. Tyler's life was taken on June 20, 2015 at the Monarch in Lincoln, Nebraska. Tyler played many sports during his... View Obituary & Service Information

The family of Tyler Jaye Walton created this Life Tributes page to make it easy to share your memories.