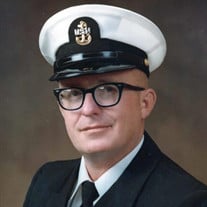 Thomas Eugene Collin was born July 13, 1940 at Aitkin, MN to Arthur Eugene and Vera Illeen (Mulvihill) Collin. He passed away Friday, May 13, 2022 at the Rock County Hospital in Bassett, NE at the age of 81 years and ten months. Tom grew up in Cloquet, MN. He graduated from Garfield Elementary School there. The family moved to Dunedin, FL, where he graduated from Junior High School. He completed the 8th grade at Clearwater (FL) High School and then transferred to Sacramento, CA graduating from C. K. McClatchy High School in June of 1958. Tom entered the United States Navy on July 15, 1958 via the Presidio of San Francisco, CA. He went through recruit training (boot camp) in San Diego, CA. Upon completing that, he entered Radioman “A” School at a training center in San Diego. After completing that and graduating, he began his first tour of duty at the Naval Air Station in Alameda, CA. He then went to the Marianas Islands in Guam. His ship was the USS Wandank. Tom then got on the ship, the USS Pickaway that was based out of Long Beach and San Diego. He then went to the Naval Communication Station at Londonberry, Northern Ireland. Following that, he was on the ship the USS Kenneth D. Bailey based out of Mayport, FL. From there he went to a Naval Reserve Training Center in Lake Charles, LA. His additional service had him at Radioman “B” School in San Diego and into Inshore Operations at Vallejo, CA. It was then he began his tour in Viet Nam with the River Division 514, Mekong Delta and then he became a part of the River Patrol Group 55 there as well. Following that, he went back to Vallejo, CA and was with the Hard Hat Shore Patrol. He then was involved with Commander Fleet Activities in Sasebo, Japan. He got on another ship, the USS Alamo that was based out of Long Beach. Tom was on Dry Dock #1 at the Alcohol Rehabilitation Center as a patient there. Wahiawa, Oahu, HI was next for Tom at the US Naval Communications Area Master Station. He then transferred to the Naval Facility in Adak, AL. Following this, his career ended with stops in Naples, Italy and then to Stockton, CA where he was honorably discharged on April 30, 1988 from the Navy at the Communications Station. Upon retirement, he had 30 years of active duty service. His final rank was Master Chief Petty Officer (MCPO)/E-9, the Navy’s highest enlisted rank with the exception of Master Chief Petty Officer of the Navy, for which there is only one. As a civilian, Tom worked for SSI (Special Security and Investigations) out of Sacramento, and then qualified for training as a police dispatch there. He did other security work to include working for Brinks as an armored truck driver for little over a year. He was friends to the husband of Betty and Jerry Aronson’s daughter, Joan, from his time in the Navy, and Joan was the one who convinced him to move out to where they lived near Long Pine, Nebraska. He sold out and then moved to Long Pine in 1991 where he resided the remainder of his life. He did work doing books for people, Gene Gregg at Gregg Sand & Gravel and then when that sold, it went to Dave Garrison. Tom worked there until 2002. Between Sand and Gravel employments, Tom worked the JAYCOR Company out of Fairfax, VA wiring buildings for communications. This had him traveling to Guam, Marianis Islands, as well as, Naples, Italy. This took over two years. Following his employment with Dave Garrison, he went to work for Matt Moody for a brief stint and then ended his working life with Sue Brown at Simple Solutions in Long Pine. Tom was preceded in death by his parents. Those left behind to mourn his passing include his godchild, Nikki Rasmussen of Frisco, TX; his close neighbor and caregivers, the Dave Zacharias family of Long Pine along with cousins and many friends. Funeral Service was held on Thursday, May 19, 2022 at the Hoch Funeral Home in Ainsworth with Phil Brown officiating. The violin selections of “The Minstrel Boy,” “When Irish Eyes Are Smiling” and “Ashokan Farewell” were played by Charity Turpin. The obituary and special remarks were given by Seamus Collins and Jack Gothard. Casket bearers were: Dave Zacharias, Dave Crooker, Wes Luther, Gerald Van Every, Terry Graff and Phil Brown. Memorials were suggested to the family for a future designation. Interment was in the Grandview Cemetery at Long Pine with military honors by Ainsworth American Legion Post #79 and the United States Navy Funeral Honor Team. Online condolences may be left for the family at www.hochfuneralhome.com.

Thomas Eugene Collin was born July 13, 1940 at Aitkin, MN to Arthur Eugene and Vera Illeen (Mulvihill) Collin. He passed away Friday, May 13, 2022 at the Rock County Hospital in Bassett, NE at the age of 81 years and ten months. Tom grew up... View Obituary & Service Information

The family of Thomas E. Collin created this Life Tributes page to make it easy to share your memories.