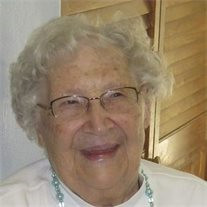 THEONA ARDITH (LEONARD) RASMUSSEN ANDERSEN Theona Ardith Leonard was born on June 18, 1914, to Alta (Miller) Leonard and Benjamin Franklin Leonard in Bassett, Nebraska. "Toni", as she was known all her life, spent most of her childhood in the home of her grandparents, Hugh and Belle Miller, in Bassett as her mother pursued a career in nursing administration. Toni graduated from Rock County High School in 1931. After high school, Toni attended three colleges in different states, transferring each time to be near her mother. She graduated from the University of Nebraska in 1936. Toni majored in journalism and had a job lined up as editor of a small-town Nebraska paper her senior year, but this was during the Depression, and before she graduated, the newspaper went out of business. She eventually took a job as a home lighting advisor in Illinois as electrical power spread across the state. When World War II began, Toni returned to school for a nursing degree, foreseeing a need for more medical personnel. She entered the Yale School of Nursing in New Haven, Connecticut. In New Haven, she had several dates with Elmer Woodrow Andersen, who was serving in the Coast Guard, (a connection made through her aunt Minnie Leonard of Ainsworth.) Toni and Elmer lost touch when Elmer was posted to Greenland. A routine checkup showed a spot on Toni's lungs that doctors thought might be tuberculosis, and she was prescribed several months of complete bed rest. Her mother Alta was working in Denver, so Toni traveled there for the long hospital stay. When peace was declared, she took an unauthorized field trip to downtown Denver to join the celebration. At the end of the quarantine period, she returned to Yale and completed work toward a master's degree in nursing, graduating in 1946. Toni took a nursing job in the Chicago area. There she met Stanley Wheeler Rasmussen of Boulder, Colorado. They married in 1948. Stanley was completing a master's degree at the University of Chicago; their first child, Martha, was born there. The small family then moved to Minneapolis while Stanley pursued a doctoral degree, and their daughter Carol was born in Minnesota. After Stanley graduated, the Rasmussen's moved to Livermore, California, where Stanley took a job at Lawrence Livermore National Laboratory. Their third surviving child, John, was born in Salem, West Virginia, during a sabbatical year that Stanley spent teaching at Salem College. During World War II, Stanley had worked with radioactive plutonium in the effort to create atomic fission. That exposure led to his death at the age of 41 in 1963. The widowed Toni was offered a job setting up and managing a student health facility at Salem College. She and the children moved to West Virginia that summer. In Salem, besides her job at the college, Toni also served as chairman of the board of the town newspaper. She was active in the Seventh Day Baptist denomination at the national level. In 1966, she spent the summer in England visiting all of the Seventh Day Baptist churches there as a representative of the U.S. church. In this period, also Toni re-connected with Elmer Andersen, who had lost his wife Helen in 1964. Again, Minnie Leonard brought the pair into contact. Toni and Elmer married in 1966, and Toni began a new career as mother to a combined family of nine children on a working ranch. Toni and Elmer lived on Moon Lake Road, near Johnstown, till 1978, when all of the children had completed high school. They then built and moved into a home north of Johnstown overlooking the Little Minnie creek. When Elmer retired from ranching, the couple joined Roving Volunteers in Christ's Service, a group of active seniors doing volunteer work for charitable organizations. They spent a happy decade traveling the United States in their RV and working. In 1996, they moved to Ainsworth for a second retirement. Theona was a painter, writer, musician and poet. She wrote several books of family history, including Jens and Kirsten, and a fictionalized version of her and her family's experiences on the ranch, Where Seldom Is Heard a Discouraging Word. She was a regular church-goer through her entire life as well as a Sunday school teacher and choir member. Her knowledge of the Bible was encyclopedic, and in Bible studies she was looked upon as the source of counsel and knowledge. Her children and friends prize her paintings of barns and other Nebraska landscapes. Theona is survived by: her children Martha Rasmussen, Carol (Charley) Noecker and John Rasmussen; her stepchildren Jerry Andersen (Anne Chalfant), Susan (Neil) Grindheim, Nancy (Jim) Campbell, Carl (Pam) Andersen, Dale Andersen and Jane (Mark) Lanz; 18 grandchildren and numerous great-grandchildren. Memorial Services were held on Saturday, March 5, 2016 at the United Methodist Church in Ainsworth, Nebraska. Pastor David Randall officiated the service. Music was provided by Sherry Campbell. A Special flute instrumental of "Jesu Joy of Man's Desiring" was provided by John Rasmussen. Special congregational selections were "Amazing Grace" and "How Great Thou Art". Inurnment followed at the Ainsworth Cemetery, Ainsworth, Nebraska. Hoch Funeral Home of Ainsworth was in charge of the arrangements. Memorials were suggested to the family in Toni's name for the future Ainsworth Care Center or to the Roving Volunteers In Christ's Service (RVIC).

THEONA ARDITH (LEONARD) RASMUSSEN ANDERSEN Theona Ardith Leonard was born on June 18, 1914, to Alta (Miller) Leonard and Benjamin Franklin Leonard in Bassett, Nebraska. "Toni", as she was known all her life, spent most of her childhood in the... View Obituary & Service Information

The family of Mrs. Theona A. "Toni" Andersen created this Life Tributes page to make it easy to share your memories.