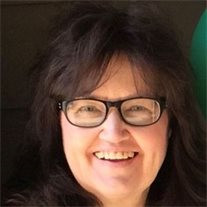 Teresa Lynn Burdick (Stech) was born to W. Arden and Roena May (Davis) Stech on August 23, 1954. Teri was the oldest child born and has one younger brother, Dr. Jim Stech, of Lexington, Kentucky. She attended and graduated from Ainsworth High School in 1972. She attended college at Nebraska Wesleyan University and then transferred to St. Elizabeth's Radiology School in Lincoln, Nebraska obtaining her degree in 1975. Teri returned to Ainsworth and married Terry L. Burdick on September 7, 1975. Teri worked at the Brown County Hospital and Brown County Clinic until 1991. In February of 1991, Rani and Teri wanted to bring something special and unique to Ainsworth so they opened Stech's, Inc. on main street, a gift shop that also carried women's business clothing, formal wear and tuxedos. Teri loved her shop and took great pride in the store. At the shop, she wanted everyone who came in to feel welcome. She loved prom season and wanted every gentleman who wore a tuxedo to feel handsome and more importantly, look good. She continued to run the shop in her free time. Teri returned to nursing at the Cherry County Hospital in October of 2003 and remained there until December, 2012. She also spent extra days working at Big John's Restaurant with her friends. Teri and Terry had two biological children, Loralea Frank and husband Mark and Byron Burdick and wife, Julia. Teri had six grandchildren, Trevor, Bayley and Robert Burdick and Mason, Hagin, and Rogen Frank. Her grandchildren who she referred to as "the littles" were her greatest blessings. In January of 2015, Andy Hershberger joined the Burdick family and became a son to Teri and Terry. Over the years, kids lived with Terry and Teri who they genuinely loved as their own, including Tsipi Gibson and George Smith. Terry and Teri were married for 42 years. Teri loved to decorate and enjoyed events, gatherings, and parties. She loved "stuff." Teri loved Thanksgiving and wanted everyone to come celebrate with her family at the ranch and especially enjoyed having her brother, Jim home each year. Her laugh was contagious and her smile was warm. Teri loved the Brown County Fair. She loved Clear Lake. The ranch was her favorite place. She loved her chickens, the baby calves in the spring, canning and her garden. One of her greatest attributes was her kindness. Teri loved so many people who truly loved her back. The best part was she loved her life. Teri is preceded in death by both her parents, Arden and Rani Stech and sister-in-law, Cindy Zurcher. She is survived by her husband, Terry of Wood Lake, two children, Loralea Frank and husband Mark of Kearney, Nebraska, Byron Burdick and wife Julia of Wood Lake. Six grandchildren; Brother, Jim Stech of Lexington, Kentucky, Parents-in-law, Ben and Alita Burdick of Johnstown, along with other family members. Memorial Services were held at the Evangelical Free Church in Ainsworth, Nebraska with Pastor Bruce Beebout and Don Letellier officiating the service. Special music selections of "Far Side Banks of Jordan," and "Knowing" were provided by Mike and Linn Baxter. Special reflections were given by friends Dan Fong and Dean Cole. A picture tribute was shown and son Byron Burdick and grandson Trevor Burdick shared a special tribute to their mother and grandmother. Honorary bearers were, Trevor Burdick, Mason Frank, Bayley Burdick, Hagin Frank, Robert Burdick, and Rogen Frank. A private family inurnment will be held at a later date at the Burdick Ranch. Hoch Funeral Home of Ainsworth assisted with the arrangements. Teri loved the Brown County Fair, the family suggests memorials be directed to the Brown County Ag Society in lieu of flowers.

Teresa Lynn Burdick (Stech) was born to W. Arden and Roena May (Davis) Stech on August 23, 1954. Teri was the oldest child born and has one younger brother, Dr. Jim Stech, of Lexington, Kentucky. She attended and graduated from Ainsworth High... View Obituary & Service Information

The family of Mrs. Teresa Lynn "Teri" Burdick created this Life Tributes page to make it easy to share your memories.

Teresa Lynn Burdick (Stech) was born to W. Arden and Roena May...