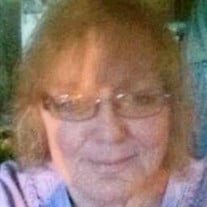 Teresa Helen Haskell was born on May 6, 1957 in Ainsworth, Nebraska to Nattellia (Johnson) Haskell and Charles Hubert “Hube” Haskell. She was the youngest of eight siblings. Teresa graduated from Ainsworth High School in 1975, going on to the University of Nebraska Omaha to finish with her degree in registered nursing, graduating Summa Cum Laude. She married Kenneth Joe Boyer in 1982 and to this union two children were born: Lexa Ann in 1984 and Booker LaVern in 1986. She later married Michael Dean Jefferis in 1997. Teri spent much of her life assisting family and friends any way that she could. She would often make it a point to tell her children, “to make good choices, and based on those choices made, could they sleep at night?” and to “count your blessings”. Teri enjoyed collecting antique glass and stoneware, but her true happiness came from being a grandmother. She often stated that, “grandchildren are your reward for having children” and that “you kids were my greatest accomplishment.” She instructed her children to “build your children up as much as you can, so that they can withstand life and the world sometimes tearing them down.” Teresa passed away on January 31, 2019 at Creighton Bergan Mercy Hospital in Omaha, Nebraska. She is preceded in death by her parents; brothers, Doug and Dave Haskell; sisters, Lexa Haskell, Bonnie Macfee, and Penny Haskell, and nephews, Justin McNeece and Troy Print Haskell. She is survived by her husband, Michael Jefferis of Ainsworth; daughter, Lexa Morrison and husband Russell, and grandsons Hayden and Holt of Seneca, Nebraska; son, Booker Boyer, wife Sara, and grandson, K.J. and granddaughter, Nattellia of Brady, Nebraska; sisters, Jinx Hedrick and husband Merl of Ainsworth, and Toni Petrie and husband Rod of Thedford, Nebraska. Sisters-in-law, Sue Haskell and Helen Haskell, both of Ainsworth; Brother-in-law, Bob Macfee of Loveland, Colorado; along with nieces, nephews and other family members. Teri will be greatly missed. Memorial Services were held on February 9, 2019 at Hoch Funeral Home in Ainsworth. Chaplain Elizabeth Ludvik officiated the service. CD selections of “Amazing Grace” by Reba McEntire, “Just Breathe” by Willie Nelson, and “When I Get Where I’m Going” by Brad Paisley and Dolly Parton were provided. Honorary bearers were, Russell Morrison, Cameron Haskell, Jacob Haskell, Scott Haskell, Gordon Haskel, and Cole McCall. Memorials were suggested to the family in her name.

Teresa Helen Haskell was born on May 6, 1957 in Ainsworth, Nebraska to Nattellia (Johnson) Haskell and Charles Hubert &#8220;Hube&#8221; Haskell. She was the youngest of eight siblings. Teresa graduated from Ainsworth High School in 1975,... View Obituary & Service Information

The family of Mrs. Teresa "Teri" H. (Haskell) Jefferis created this Life Tributes page to make it easy to share your memories.

Teresa Helen Haskell was born on May 6, 1957 in Ainsworth, Nebraska...