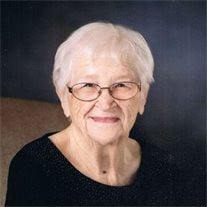 Susanne Lois "Susie" (Mack) Reece age 85 of Ainsworth, Nebraska joined the Lord's open arms on December 13, 2017 at the Kearney Regional Medical Center, Kearney, Nebraska. She was born on May 1, 1932 at Lusk, Wyoming, to Gerry and Marie (Cammenzind) Mack. Susie grew up near Harrison, Nebraska where she graduated from high School in 1950. She was the eldest of three children. She was married to Richard "Dick" Reece on May 7, 1950 at Harrison, Nebraska. To this union, there were four daughters born; Arlynne Marie in 1950, Carolyn June in 1952, Rosalyn Ann in 1954, and Mollee Mae in 1969. The family moved to Ainsworth in 1965. Susie was a Girl Scout leader, worked as a cook at the Bethesda Nursing Home the old Ainsworth Hospital, the Brown County Hospital, as well as Big John's Restaurant. She also enjoyed sewing and was an avid reader. Susie was preceded in death by her parents, Gerry and Marie, her husband, Dick, and a brother, Charles Mack, as well as two nephews and a niece. She is survived by her daughters, Arlynne Reece of Ainsworth, Carolyn Essink and husband Mike of Waverly, Nebraska, Rosalyn Fernau and husband Jerry of Ainsworth, and Molle Reece and Karl Weichman of Kearney; Sister, Linda Skjonhaug of Brighton, Colorado, Brother, Donnie Mack & wife Betty of Harrison, Nebraska. 11 Grandchildren, LaNeah and Jairo Orellana, Andrea (Jim) Dombrowski, Tony Ohmberger, Angela Essink, Nicole Essink, Clint Essink, Richard Fernau, Travis Fernau, Tammy Fernau, Tina Fernau; 15 great-Grandchildren, two great-great-granddaughters, and many nieces, and nephews, along with special friend, Carma, Brandie, Sara, and Hunter Kluthe and family of Minden, Nebraska. Graveside services were held at the Glendale Cemetery near Crawford, Nebraska. Pastor Tim McCrary officiated the service, as well as accompanied himself on the guitar and sang "How Great Thou Art". Pallbearers were Susie's family. Hoch Funeral Home of Ainsworth and Chamberlain Funeral Home Chapel of Chadron, Nebraska assisted with the arrangements. In lieu of flowers, memorials may be made to the Donors Choice, and may be sent to: Mollee Reece: 2955 99th St. Place Kearney, Ne. 68845.

The family of Mrs. Susanne Lois "Susie" Reece created this Life Tributes page to make it easy to share your memories.