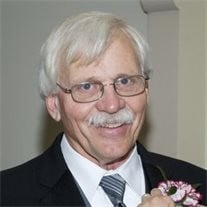 Stanley Harold Schelm age 68 was born to Harold and Irene (nee Rauscher) Schelm on August 7th, 1947 in Ainsworth, Nebraska, and died Sunday, December 27th, 2015 at his home in northwest Ainsworth, as of a result of ALS (Lou Gehrig's Disease). He married Rebecca Frahm of Plainview May 21st, 1980 and had two children, Nathan Carl and Jennifer Marie. He was baptized into the Christian faith in Zion Lutheran Church on August 24th, 1947 and was confirmed in that faith on May 21st, 1961. He was a life-long member of Zion Lutheran Church and served on the church council in several capacities. Stan went to the University of Nebraska at Lincoln and majored in Agronomy and was a member of Alpha Gamma Sigma fraternity. His intention was to come back to Ainsworth, as his family was always very important to him. Stan enjoyed hunting and fishing in the Sandhills when he was a young adult. He also liked playing volleyball. After college, he came home to the family farm and started farming with his father, Harold Schelm. Stan's return to the family farm allowed the two men to expand into raising hogs. After marrying, since Rebecca loved raising hogs, they were able to further expand their hog-raising. When Stan wasn't farming, he had interest in two hobbies, bowling and golf. He won many bowling trophies and was an avid golfer. He is a devout Christian. Stan is preceded in death by his father, Harold Schelm. He is survived by his wife Rebecca "Bec" (Frahm) Schelm of Ainsworth, his son Nathan Schelm of Ainsworth, and his daughter Jennifer (Schelm) and husband Stephen Miller and granddaughter Abigail of Midland, Michigan. He is also survived by his mother, Irene Schelm, his older brother Larry and wife Sandy Schelm and his younger sister Janet and husband Brian Vogelsang. Memorial services were held on Dec. 31, 2015 at the Zion Lutheran Church in Ainsworth, Nebraska. Pastor Georg Williams officiated over the service. Music was provided by Georgia Williams. Music selections were, "All Mortal Flesh Keep Silence" and "O Lord. We Praise Thee" and "It Is Well With My Soul." Inurnment followed at the Lutheran Cemetery near Ainsworth. In lieu of flowers, memorials can be made to Zion Lutheran Church or the ALS Association Mid-America Chapter. Hoch Funeral Home was in charge of the services.

Stanley Harold Schelm age 68 was born to Harold and Irene (nee Rauscher) Schelm on August 7th, 1947 in Ainsworth, Nebraska, and died Sunday, December 27th, 2015 at his home in northwest Ainsworth, as of a result of ALS (Lou Gehrig's Disease).... View Obituary & Service Information

The family of Mr. Stanley H. Schelm created this Life Tributes page to make it easy to share your memories.