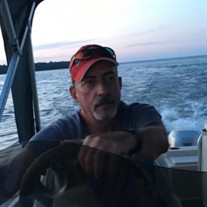 Stanley Reed Dillon was born March 12, 1961 to Wilferd and Donna (Biltoft) Dillon in Ainsworth, NE. Stan was the middle son of three boys and lived in Ainsworth from birth until the 4th grade. He was confirmed on December 22, 1970. Stan then moved to O’Neill, NE and graduated from O’Neill High School. Stan spent a good share of his time fishing, hunting, and trapping when he was young. He also enjoyed working with his Grandpa Allen on the farm and he spent a lot of time on the Niobrara River fishing and canoeing. Stan and Bill got snow shovels for Christmas one year and loved to be outside scooping snow. He also worked a newspaper route when he was young. Even at a young age, Stan was a hard worker and he always knew how to provide for his family. He would save money for Christmas by hiding it in a book and then surprising his wife with it to buy Christmas gifts for his children. Stan enjoyed all western movies and outdoor sports. Stan was a true outdoorsman. He would go hunting every Thanksgiving morning and then make it back just in time to celebrate the holiday. Stan loved catching all kinds of fish; walleye, northern pike, crappie, bass and bluegill. He had all kinds of fishing stories. Stan Dillon and Juleen (Wondercheck) met in high school and then moved to Oklahoma in 1980 to attend college at Bartlesville Wesleyan College in Bartlesville, OK. Stan and Juleen were united in marriage on December 26, 1981 in Atkinson, NE at the Wesleyan Church and then moved back to Bartlesville. Stan then found employment at Phillips Petroleum Company working in Information Technology. He attended classes at Phillips to further his knowledge in Information Technology. He was a quick learner and was self-taught in many subjects. Stan worked for Phillips Petroleum Company for 19 years before he was recruited to work for IBP in South Sioux City, NE, which was later bought out by Tyson. At Tyson he was considered the “go to guy” in his role as a Network Engineer. Stan loved his job and he excelled in it. His boss and coworkers described him as always solving problems with a smile. Everyone loved him and he will be greatly missed. Stan & Juleen had three wonderful children, Kasandra, Melissa and Caleb. Stan was a wonderful father who always took time to play with his children. He took them on trips to Branson, Missouri and to the Black Hills in SD. Stan had a lifetime hunting and fishing license which he used as much as he could. He loved Nebraska, his home. He enjoyed hunting, bow hunting and fishing in Oklahoma where he enjoyed catching enormous catfish. Stan and Juleen were blessed with five grandchildren, Micah (10 yrs), Walker (8 yrs), Grace (4yrs), Tristan (2.5 yrs) and Irelynn (newborn). He adored his grandkids and took various fishing trips with them to northern Minnesota, Fort Randall & Platte, SD. Stan was a strong, loving, patient and big hearted father, husband and grandfather. He will be greatly missed and never forgotten. He is looking down at us from Heaven saying “I love you all” and don’t be sad because I’m more alive than I’ve ever been before. Stan is preceded in death by his parents, Wilferd & Donna Dillon, and his grandparents, Allen and Laura Biltfoft. He is survived by his wife Juleen Dillon of Dakota Dunes, SD, his three children and their spouses, Kasandra Girard and husband Mike of Irene, SD, Melissa Galvin and husband Brandon of Sioux Falls, SD, Caleb Dillon and wife, Ashlee (Tuttle) of Sioux Falls, SD, his two brothers and their spouses, Bill and Tammy Dillon of Valentine, NE and Don and Christy Dillon of Lincoln, NE, his aunts Lois Rahn and Lorraine Biltoft, and his five grandchildren, Micah, Walker, Grace, Tristan, and Irelynn, and many nieces, nephews and other family members. Funeral Services were held on Saturday, November 28, 2020 at the Hoch Funeral Home in Ainsworth. Pastor Donna Smith officiated at the service. CD music selections played were “Save A Place For Me” by Matthew West, “You Raise Me Up” by Celtic Women, “Heaven Song” by Phil Wickham and “Come As You Are” by David Crowder. Casketbearers were: Andrew Duclos, Nathaniel Duclos, Isaac Duclos, Jordan Wondercheck, Travis Michaelis and Curtis Michaelis. Internment followed at the Grandview Cemetery in Long Pine, Nebraska. Memorials were suggested to the family in Stanley’s name to be designated later. Arrangements were under the direction of the Hoch Funeral Home of Ainsworth.

Stanley Reed Dillon was born March 12, 1961 to Wilferd and Donna (Biltoft) Dillon in Ainsworth, NE. Stan was the middle son of three boys and lived in Ainsworth from birth until the 4th grade. He was confirmed on December 22, 1970. Stan then... View Obituary & Service Information

The family of Stanley R. Dillon created this Life Tributes page to make it easy to share your memories.