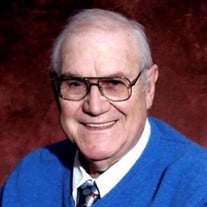 Stanley G. Burkinshaw passed away Saturday, February 26, 2022, at his home in Creighton, Nebraska. He was born, May 31, 1932, on a farm three miles south of Jamison, Nebraska. He was the youngest of five children born to Gurdon and Dollie (Goodwin) Burkinshaw. He graduated from Long Pine (Nebraska) High School in 1951. After high school, he joined the United States Air Force, retiring after 20 years as a Master Sergeant. On August 3, 1952, Stan married Jeanie Luehrs in the Long Pine United Methodist Church. After their wedding, Stan and Jean began the military life. They were stationed at many bases, living in South Dakota, Massachusetts, Texas, Japan and Hawaii. During this time, they had four children: Connie, Kippy, Cathy and Carmen. Stan held several positions in the military including writing historical stories about various intelligence missions. Stan retired from the military in 1972 and returned to Nebraska. They made their home in Norfolk, Nebraska where Stan worked for Western Typewriter and Office Supply selling office equipment. Stan and Jean were always open for new challenges and soon needed a change from Norfolk. In 1975, they bought the gas station in Long Pine and the Sinclair station in Ainsworth, Nebraska. Their son Kippy was a mechanic and ran the stations. Shortly after, Stan, Jean and family moved back to Long Pine to help run the stations. Once in Long Pine, they decided to turn the front of the gas station into Jeanie’s Restaurant. They owned and managed Jeanie’s Restaurant for the next 20 years before retiring. Stan and Jean had enough of the cold weather by that time. After traveling to the warm spots of the United States in a pop-up camper, they decided to spend their winters in Weslaco, Texas and the summers in Long Pine, enjoying the amenities of the Hidden Paradise. Stan always enjoyed remodeling small houses, and spent many days working on his projects, building up a rental business. He also enjoyed writing histories about his life, Long Pine, Hidden Paradise, and war heroes. Stan was preceded in death by his parents; daughter, Cathy; granddaughter, Tabitha Arehart; sisters, Hazel McNally and Gloria Burkinshaw; and brother, Ken Burkinshaw. He is survived by his wife of 69 years, Jeanie of Creighton/Long Pine; children, Connie (Dennis) Roark of Keaau, HI, Kippy (Lisa) Burkinshaw of Ainsworth, Carmen (Steve) Thieman of Norfolk; and son-in-law, Bob Arehart of Creighton; along with seven grandchildren and three great-grandchildren; a sister, Dessly Burkinshaw of Norfolk and numerous nieces, nephews and other family members. A Memorial Service for Stan Burkinshaw and Cathy (Burkinshaw) Arehart will be held on Saturday, June 25, 2022 at 10:00 AM in the Faith Christian Fellowship of Long Pine. Inurnment will follow in the Grandview Cemetery at Long Pine. Memorials have been suggested to the family in their names. Online condolences may be left for the family at www.hochfuneralhome.com. Hoch Funeral Home of Ainsworth is assisting with arrangements.

Stanley G. Burkinshaw passed away Saturday, February 26, 2022, at his home in Creighton, Nebraska. He was born, May 31, 1932, on a farm three miles south of Jamison, Nebraska. He was the youngest of five children born to Gurdon and Dollie... View Obituary & Service Information

The family of Stanley G. Burkinshaw created this Life Tributes page to make it easy to share your memories.