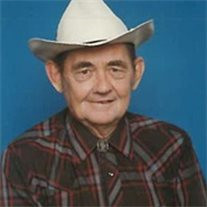 Staley "Swede" Gene Osborn was born July 24, 1927 in Ainsworth, Nebraska. He passed away on October 30, 2017 at the Faith Regional Health Services in Norfolk, Nebraska. The son of Ray and Mildred "Dot" (Rucker) Osborn, he was born in the house of his grandparents, R.F. Osborn and Mary(Winter) Osborn. His grandmother Mary delivered him. He was baptized in the United Methodist Church in Ainsworth. Swede attended school in Ainsworth where he lettered in football, basketball, track, and boxing in his junior year. His coach named him 'Swede' because he reminded him of Swede Langer, Ainsworth's best basketball player, a college All-American. In June of 1944, Swede enlisted in the United States Navy, but was not called into active duty until after his first football game in his senior year at Ainsworth. Swede not only served in the Navy but also in the Army and Air Force. During his service, he met and married Verna M. Fowler and went on to have three children, a son, Bradley, a daughter, Vickii, both born in Ainsworth and later another son, Curtis born in California. Swede worked for many years as a land surveyor. He enjoyed writing and had some poetry as well as some short stories published. He also loved playing golf and playing pinochle with family and friends. Swede was preceded in death by his parents, his wife, Verna, her parents, Luke and Wilma Fowler, his brother, Manny, and his sisters, Mardele and Mary. Swede is survived by his brother, Dick Osborn of Calamus, Iowa; his children, Brad (Sandy) Osborn of Palo, Iowa, Vickii (Tim) Cook of Kingman, Arizona, Curt (Jacqie) Osborn of Vinton, Iowa. His seven grandchildren, Bryan Osborn, Ben (Brooke) Osborn, Kelly Cook, Jakki (Robert) Paulson, Alex Osborn, Elle Osborn and Chloe Osborn, and his eight great-grandchildren, Luke, Thomas, Blake and Brady Osborn, Serenity and Connor Armijo, and Trevor and Taylor Jennings. A private family Graveside service was held at 11:30 AM on Friday, November 3, 2017 at the Ainsworth Cemetery, in Ainsworth, Nebraska. Pastor Gary Graesser officiated at the service. A Eulogy was given by Jacqie Osborn. Active Casket bearers were Staley's Grandsons and Great-Grandsons. Honorary casket bearers were Staley's Granddaughters and Great-Granddaughters. Military Honors were conducted by the Aisnworth American Legion Post #79. Hoch Funeral Home of Ainsworth was in charge of the arrangements.

Staley "Swede" Gene Osborn was born July 24, 1927 in Ainsworth, Nebraska. He passed away on October 30, 2017 at the Faith Regional Health Services in Norfolk, Nebraska. The son of Ray and Mildred "Dot" (Rucker) Osborn, he was born in the house... View Obituary & Service Information

The family of Mr. Staley Gene "Swede" Osborn created this Life Tributes page to make it easy to share your memories.