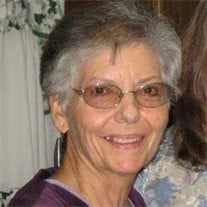 Shirley Ann Klatt, age 71, was called to be with our Lord and Savior on November 05, 2012, due to congestive heart failure. Circumstances in the late 70's led her to be a follower and believer in Christ and she has been a great influence and inspiration since. She was a loving mother, grandmother, great-grandmother, sister, aunt and friend. She will be dearly missed by her family and friends. Shirley was born on December 14, 1940 in Bridgeport, NE to Woodrow W. "Bus" and Helen M. (Bauer) Woolsey. She graduated from Bridgeport High School in 1959. She married Corwin Arndt and three children were born to this union, Michael, Denise and Gregory. In 1968 she married John Klatt in Bridgeport, NE and to this union one son was born, Brian. They were active members of the First Presbyterian Church. In 1978, they moved from Bridgeport to Ainsworth, NE. Shirley sold Avon for numerous years, operated a day care service and later volunteered at the Thrift Store. She and John were active members of United Methodist Church. She enjoyed gardening and attending her flowers, as well as socializing with her friends and helping where she could. She and John resided in Ainsworth for 33 years until John passed away in 2010. Shirley remained in Ainsworth until health problems required her to move to Lincoln with her oldest son, Mike, Becky and family, to be closer to the medical facilities. Survivors include four children, Michael and Rebecca Klatt of Cortland, NE, Denise and Gary Troester of Santa Maria, CA, Gregory and Ashley Klatt of Keller, TX and Brian and Mindy Klatt of Sioux Falls, SD; thirteen grandchildren, and four great-grandchildren; two brothers, Gerald Woolsey (Alice) of Chappell, NE, and Robert Woolsey (Terri) of Oberlin, KS; one sister, Marilyn Cantrell of Chappell, NE; one sister-in-law, Roberta Hopkins of Clatonia, NE; one aunt, Mary Bauer of Casper WY and several nieces and nephews. Funeral services were held in Ainsworth, NE at the United Methodist Church on Saturday, November 10, 2012 at 2:00 PM., with Pastor Eldon Davis officiating over the service. CD selections of "In The Garden", "Amazing Grace" and "The Old Rugged Cross" by Mary Van Arsdale as well as "I Can Only Imagine" by Mercy Me were provided. Honorary bearers were Seth Beitel,Dustin Klatt, Vrandon Klatt, Garrett Troester, Aaron Troester, Jayden Troester, Justin Dyer, Easton Klatt, Tyler Terryberry and Reilly Hoch. Special remarks were given by the family. Visitations were held from 5 to 8 pm at the Hoch Funeral Home. A private inurnment will be held at the Ainsworth Cemetery a later date. Arrangements were entrusted to Hoch Funeral Home. In lieu of flowers, memorials were suggested to be given to the United Methodist Church.

Shirley Ann Klatt, age 71, was called to be with our Lord and Savior on November 05, 2012, due to congestive heart failure. Circumstances in the late 70's led her to be a follower and believer in Christ and she has been a great influence and... View Obituary & Service Information

The family of Shirley A. (Woolsey) Klatt created this Life Tributes page to make it easy to share your memories.

Shirley Ann Klatt, age 71, was called to be with our Lord and...