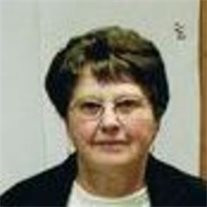 Shirley Ann (Swim) Titus Dutrow was born on April 18, 1933 and passed away on April 10, 2014 at the Brown County Hospital in Ainsworth, Nebraska, at the age of 80 years, 11 months and 23 days old, as results of strokes that began on November 19, 2013. Shirley was the second of three children born to Vernon O. and Esther A. (Rector) Swim. She was born in the Turkey Creek community and went to grade school District #52, which was known as the Swim School. Shirley's grandparents, Charley and Amelia Swim, had donated the school site for the children in the area. In 1951, Shirley graduated from Keya Paha County High School. After graduation Shirley taught at the Rock Ford District #14 school, located in south west Keya Paha County near Rocky Ford and the Cherry County border. On March 30, 1952, Shirley married Donald E. Titus and to this union two sons, Darrel Don and Larry Eugene, were born. Don served in the Army during the Korean War and Shirley joined him while living in Fort Hood, Texas. Shirley and Wayne Dutrow were married on September 16, 1977 at Ainsworth. Shirley was preceded in death by her parents, Vern and Esther Swim; her sister, Jean Swim; nephew, Randy Swim; great niece, Stacey Swim; mother-in-law, Blanch Dutrow and infant grandchild, Grace Dutrow. Survivors include husband, Wayne Dutrow of Ainsworth; sons, Darrel and Larry of Springview, Nebraska; step children, Bruce Dutrow and wife Tracy of Yankton, South Dakota and Melany Baxter (Bryce Franzen) of Gothenburg, Nebraska; brother, Roger Swim and wife Donna of Springview, along with grandchildren, great-grandchildren, nieces and nephews. Funeral Services were held on Monday, April 14, 2014 at the Evangelical Free Church at Ainsworth with Pastor Mick Thornton officiating. Burial was in the Ainsworth Cemetery. Music was provided by Pam Barrow with the congregation singing, "In The Garden," "Old Rugged Cross," and "Beyond The Sunset." Casketbearers were: John Titus, Jason Titus, Jordan Baxter, Jesse Baxter, Preston Franzen and Paul Carpenter. Honorary Bearers were: All of Shirley's Other Family & Friends. Memorials were to be directed to the family in her name for future designation. Online condolences may be made to the family at: www.hochfuneralhome.com.

Shirley Ann (Swim) Titus Dutrow was born on April 18, 1933 and passed away on April 10, 2014 at the Brown County Hospital in Ainsworth, Nebraska, at the age of 80 years, 11 months and 23 days old, as results of strokes that began on November... View Obituary & Service Information

The family of Mrs. Shirley A. (Swim) Titus Dutrow created this Life Tributes page to make it easy to share your memories.