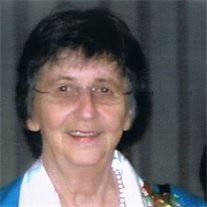 Shirley J (Jewell) Lentz died July 3, 2014 at the Ainsworth Care Center. Shirley was born on January 12, 1938 to Richard and Selma Jewell. Shirley graduated from Long Pine High in 1955 and then attended Central Business College in Denver Colorado. In 1950 Shirley met and began to date Ralph Lentz. On March 17, 1956, Shirley and Ralph were married and became parents of five children, Mike, Deb, Pat, Dan, and Jeff. For the next sixty three years the two would seldom be apart. Shirley was a very competitive and talented individual. She loved sports and she loved her family. The love for her family led her to spend years researching and compiling genealogy. Thousands of hours were spent on this endeavor. This journey started after her children had left the home. She gave this time to ensure that future generations would not forget the sacrifices of those before us. Her extensive knowledge of those sacrifices motivated Shirley through the most difficult times in her own life. She never worried that she could not overcome any obstacle. She accepted any challenge and moved on. She was a JEWELL in every sense of the word. Shirley is preceded in death by her parents and her husband, Ralph Lentz. She is survived by all five of her children, Mike (Katie) Lentz of Ainsworth, Deb (Bob) Nason of Alliance, Pat (Colleen) Lentz of Ainsworth, Dan (Alane) Lentz of Ainsworth and Jeff (Margaret) Lentz of Lytle, TX. She's also survived by her fifteen grandchildren, eleven great grandchildren; sister, Sandra (Jerry) Clark of Long Pine and many brothers & sisters-in-law, nieces and nephews. Visitations with funeral service following were held on Monday, July 7, 2014 at St. Pius X Catholic Church in Ainsworth, Nebraska with Father Phil Flott serving as Celebrant. Music was provided by Nichole Flynn and Jason Nelson with song selections of "The King of Love My Shepherd Is", "Shepherd Me, O God","Be Not Afraid", "Amazing Grace", "How Great Thou Art". Pallbearers were, Kevin Lentz, Cody Lentz, Hunter Christ, Mark Lentz, Eric Lentz, Matthew Lentz, Benjamin Lentz, Nathan Lentz and Sean Lentz. Burial was held at the Grandview Cemetery in Long Pine, Nebraska. Memorials were directed to the family in Shirley's name for a future designation. Hoch Funeral Home of Ainsworth was in charge of the arrangements.

The family of Mrs. Shirley J (Jewell) Lentz created this Life Tributes page to make it easy to share your memories.