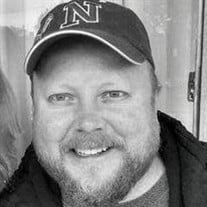 Shawn Dennis DeWeese was born on May 13, 1972 in Bassett, Nebraska to Dennis and Linda (Denny) DeWeese and welcomed home by his proud sister, Suzanne. Shawn attended Long Pine Grade School and loved playing basketball while being coached by his father. He attended Ainsworth High School graduating in 1990. After high school, Shawn attended National College in Rapid City, South Dakota where he obtained his Associates Degree in Travel and Tourism and was one of few who was accepted into an internship at Walt Disney World. Shawn continued his education at the University of Missouri graduating Summa Cum Laude on his birthday in 1995 with a Bachelors Degree in Business Marketing. Shawn accomplished many things in life and worked hard to achieve them. After college, Shawn lived in St. Louis, Missouri, Indianapolis, Indiana, and Chicago, Illinois working for various marketing research firms. While in Chicago, Shawn also worked as a restaurant manager of Orange and a volunteer at the Care For Real Food Pantry which eventually turned into a full-time job helping others. Shawn loved showing anyone who came to visit the sights and sounds of Chicago. In 2014, Shawn retuned to Long Pine leaving the city life he loved so much, due to failing health. Shortly after returning home, he was diagnosed with Huntington's Chorea. Despite this setback, Shawn faced life with a positive attitude and after a few years, he was able to do his own venturing back to Chicago and Michigan visiting friends and camping along the route. Shawn loved his family immensely and always wanted family visits to extend into the early hours of the next day. He was especially proud of his nephew Austin, sharing a very special and strong bond that all could see. Although Shawn did not have a biological brother, he always viewed his lifetime friend Chris Kuester as one and their bond was unshakable. Shawn also loved camping, water skiing, snow skiing, board games, cards and anything that involved fun and laughs. Many looked up to him and knew he was the nicest guy ever, never saying an unkind word to anyone. During his junior high school years, Shawn surprised his mom with his new dog, Spike. We have never figured out how Shawn got to keep Spike. Shawn was preceded in death by his grandmothers, Darlene Denny and Betty DeWeese and a cousin, Rick Denny. Shawn is survived by his parents, Dennis and Linda DeWeese; sister, Suzanne and husband Tim Joe; nephews, Austin Anderson, and Scott Joe; nieces, Jennifer and husband Josh Morgan, and Amy and husband Spencer Culler; his grandpas, Don Denny and Dean DeWeese, along with aunts, uncles, cousins, and many friends, and also foster siblings, Steve Cole and Joe Cole and Jeana (Stamp) Wendt. Shawn passed away Wednesday, December 19, 2018 at the Brown County Hospital in Ainsworth. Funeral Services were held on December 22, 2018 at the United Methodist Church in Ainsworth, Nebraska with Pastor David Randall officiating at the service. The CD selections of “How Great Thou Art,” “Amazing Grace,” and "Old Rugged Cross” by Alan Jackson were provided. Special memories were shared by Shawn’s cousin, Shane Kinnick. Active Casketbearers were: Shane Kinnick, Jory Daniels, Donnie Denny, Vance Denny, Bryan McCartney, Brad McCartney, Austin Anderson and Scott Joe. Honorary Casketbearers were: Rob McCartney, Chris Kuester, and all of Shawn’s other friends and family. Burial followed in the Grandview Cemetery at Long Pine. Hoch Funeral Home of Ainsworth was in charge of the arrangements. In lieu of flowers memorials were suggested to the family in his name for a future designation. To leave an online condolence visit www.hochfuneralhome.com.

Shawn Dennis DeWeese was born on May 13, 1972 in Bassett, Nebraska to Dennis and Linda (Denny) DeWeese and welcomed home by his proud sister, Suzanne. Shawn attended Long Pine Grade School and loved playing basketball while being coached by... View Obituary & Service Information

The family of Mr. Shawn D. DeWeese created this Life Tributes page to make it easy to share your memories.