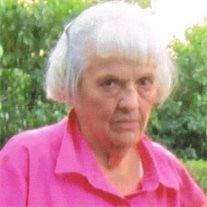 Sharon Louise Moore was born July 1, 1942 to John Ira and Mabel (Knapp) Moore of Ainsworth, Nebraska, and passed away on December 9th, 2014 at the Collier Hospice Center in Wheat Ridge, Colorado after experiencing several small strokes. Sharon spent most of her young life at the farm near Johnstown, Nebraska. As a young child she liked working around the farm and playing. She attended elementary school in Johnstown. She learned to drive a tractor around the farm and worked long and hard during those hot summer days raking the hay in perfect rows, so they could be stacked. Shirley, her youngest sister, recalls a time when a rooster was attacking Shirley. Sharon got a broom and took out after the rooster. Needless to say, they had chicken and dumplings for dinner. Her mother, Mabel passed away in 1954. She was only thirteen years old. Her father sold the farm to Everett, (her older brother) so he could buy a house in Ainsworth so Sharon could attend Junior High there. They continued to be active on the farm helping to care for Everett and Marianne's children. After quitting school, she went to work at Masters Nite & Day Cafe´ and continued working there until it burned down. Sharon was an active member at the Assembly of God Church in Ainsworth. With failing health and job scarcity, she moved to Golden, Colorado to live with her sister Veloris. When her health improved she was able to get employment at Grand Oaks Nursing Home in Arvada, Colorado. She continued working there until she retired at the age of 66. Sharon was dedicated to working. She loved the mountains, but Nebraska ways always called "home." Sharon moved to Wheat Ridge in 2010 to live with her sister Shirley when here sister Veloris' health began to fail. Every year Sharon looked forward to going to Nebraska to spend time with her brother Everett, and always made a point to go to Sunday services at the Assembly of God Church. Sharon was an innocent soul, and liked by everyone. She had some challenges, but always did her best. Sharon loved visiting the zoo, loved dogs, going for drives, riding trains, watching the birds, as well as taking trips with the Senior Center Residents. She was a "no frills kind of gal", "easy going", and a "little stubborn and opinionated." Sharon was preceded in death by her parents, John Ira and Mabel; her brother, Richard; sister, Veloris; and brother, Everett. She is survived by her sister, Shirley Ellison of Wheat Ridge Colorado; nieces, Kimberly Cheney and family of Golden, Colorado, Sandra Mott and family of Golden, Colorado, Debbie Baggenstoss and family of Plattsmouth, Nebraska, Wanda Moore of Los Angeles, California, Jane Moore and family of Madison, Wisconsin; nephews, Conrad Eaglefeather of Mission, South Dakota, and John Moore of Madison, Wisconsin; sister-in-law, Lorraine Moore of Madison, Wisconsin. Funeral services were held on December 15, 2014 at the Assembly of God Church in Ainsworth, Nebraska with Pastor Gary Graesser officiating the service. Music was provided by Marjorie Wilkins. Congregational selections of "Amazing Grace" and "When The Roll Is Called Up Yonder" were also provided. Pallbearers were Dan Baggenstoss, Jacob Baggenstoss, Loren Mott, Jess Mott, and Conrad Eagle Feather. Burial was held at the Ainsworth Cemetery under the direction of Hoch Funeral Home of Ainsworth. Memorials were directed to the Ainsworth Assembly of God Church.

The family of Sharon Louise Moore created this Life Tributes page to make it easy to share your memories.