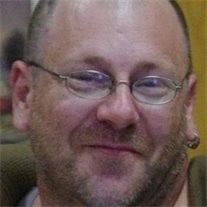 Shamus Hartgrave of Bassett, Nebraska, left this world on Thursday, September 21, 2017. He was born ton May 16, 1975 to Mary Ann (DeBolt) and John C. Hartgrave in Bassett, Nebraska. In his youth, his family lived in Norfolk, Nebraska, Long Pine, Nebraska, and Alliance, Nebraska, but after graduating, Shamus decided to return to his roots in Bassett, Nebraska. Shamus began dating Sonya Belmont in June of 2004, and made the choice to publicly commit his life and love to her on July 4, 2014. During their relationship, they have had many fur babies, featuring, Elmo, Taz, and Midnight, with their current fur children being Tiny, Zeus, and Missy. Shamus' most prized possession, besides his wife, was his "Wizard and Dragon" collections. If you knew Shamus, you knew his love for knowledge of all things "tech" related. Sonya shared the memory of the night before his passing of how Shamus tore apart a gaming system he had purchased for a friend. After exploring how everything worked, he put in back together. He then played the game to make sure it was working correctly. The reason for this you ask, so he knew how to fix it if it stopped working. Shamus is preceded in death by his grandparents, Leo and Katherine DeBolt, uncle, Jerry DeBolt, and aunt, Betty Hart. He is survived by his wife Sonya and their fur babies, of Bassett, his parents, John and Mary Ann Hartgrave and sister Adeline of Alliance, Nebraska, His parents-in-law, Joseph and Bonnie Belmont of Newport, Nebraska, along with aunts, uncles, nieces, nephews and other family members. Memorial Services were held at the Hoch Funeral Home in Ainsworth on September 26, 2017 with Pastor Dennis Quigley officiating the service. CD selections of "Tiny Dancer" by Elton John, "Father and Son" by Cat Stevens "Stairway to Heaven" by Led Zeppelin, and "See you Again" by Charlie Path, were provided by. Honorary bearers were Steve Anderson, Ethan Anderson, T.J. Belmont, Kip Gillis, Conan Allen, Tad Glidden, all of his nieces, nephews, and fellow employees at Christensen Farms. A Private family inurnment will be held at a later date. Hoch Funeral Home of Bassett was in charge of the arrangements. In lieu of flowers memorials were suggested to the family in his name.

The family of Mr. Shamus Hartgrave created this Life Tributes page to make it easy to share your memories.

Shamus Hartgrave of Bassett, Nebraska, left this world on Thursday,...