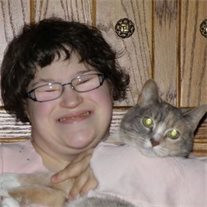 Shaina Michelle Shaw was born Februrary 5, 1988 to Ben and Danita (Fischer) Shaw, at Atkinson, Ne. She passed away on January 13, 2015 at Children's Hospital and Medical Center in Omaha, Ne at the age of 26 years, just 23 days shy of her 27th birthday. From the time Shaina was born, weighing only 4 pounds, 3 ounces, she was a fighter. Throughout her life, she was confronted with challenge after challenge but she faced each one with a smile on her face. Shaina attended Bassett Grade School and Rock County High School. Even though she experienced severe hearing loss and the loss of sight in her right eye, Shaina still graduated third in the class of 2007. She continued her education through age 21 at Rock County High School. In 2010, her sister became her care provider. They worked on many goals, taking some college classes online and helping Shaina to almost completely care for herself, while still residing in the comfort of her parents' home. Shaina loved cats, especially her 14 year old cat Britney. She was an avid fan of American Idol and could answer any trivia questions related to it. Shaina also enjoyed music, reading, and movies. She enjoyed helping with her three nephews, Mason, Collin, and Aiden, and they adored her. In 2012, Shaina was diagnosed with Myhre Syndrome, a rare genetic condition. Myhre Syndrome accounted for all the life challenges Shaina faced. This became all too apparent when she was taken from this earth on January 13. Shaina is preceded in death by a grandfather, Paul Shaw. She is survived by her parents, Ben and Danita (Fischer) Shaw, sister Leah and husband Justin Hagan, and brother Ethan Shaw, three nephews, Mason, Collin, and Aiden Hagan, grandparents Roger and Ione Fischer, all of Bassett, grandmother Cecilia Shaw of Ainsworth, numerous aunts, uncles, cousins, and friends. Funeral services were held on January 19, 2015 at the St. Peter Lutheran Church in Bassett, Nebraska. Pastor Melody Brink officiated the service. Special CD selections of "I Can Only Imagine" by Mercy Me, "God Must Have Spent A Little More Time On You" by N-Sync and "Save A Place For Me" by Matthew West were provided. Pallbearers were Ethan Shaw, Justin Hagan, Jonathan Shaw, Daniel Shaw, Glen Shaw, Keith Shaw, Joshua Ball, Tom Theisen, and Parker Theisen. Honorary bearers were Mason, Collin, and Aiden Hagan and all of Shaina's other family & friends. Burial was held at the Bassett Memorial Park Cemetery in Bassett, Nebraska under the direction of Hoch Funeral Home of Bassett. Memorials were directed to the family in her name for a future designation.

Shaina Michelle Shaw was born Februrary 5, 1988 to Ben and Danita (Fischer) Shaw, at Atkinson, Ne. She passed away on January 13, 2015 at Children's Hospital and Medical Center in Omaha, Ne at the age of 26 years, just 23 days shy of her 27th... View Obituary & Service Information

The family of Miss Shaina Shaw created this Life Tributes page to make it easy to share your memories.

Shaina Michelle Shaw was born Februrary 5, 1988 to Ben and Danita...