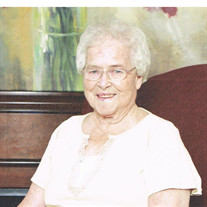 Sarah Esther Anson was born October 13, 1926 to William S. and Gladys A. (Carson) Anson near Orchard, Nebraska. She passed away July 10, 2019 at Rock County Long Term Care in Bassett, Nebraska at the age of 92 years and nearly 9 months. Sarah was the youngest of five children. She graduated in 1945 from Orchard High School. She told of riding her bicycle 2½ miles to school during WWII. Sarah taught one year at District #30 in Antelope County. In April of 1946, Sarah met Howard Clay who had served in WWII with her brother, Walter. On October 7, 1946 they were married in her parent’s home near Orchard. Following a double honeymoon with Walter and Dorothy Anson to New Mexico, they made their home near Springview, Nebraska. They raised beef cattle, hogs, sheep, chickens, dairy cattle and kids. They were blessed with seven children: Marilyn, Doug, Ed, Marty, Jim, Dave and Mel. Sarah was a wife, ranch hand and mother while her children were growing up. She was on the District #56 School Board for over 20 years. She worked at the lunch program when her children were older. Sarah was a correspondent for the Springview Herald and had columns titled Iowa Flats and Out Our Way. She was Howard’s care giver after he had a stroke until his death. After Howard’s death, she worked at the potato plant and Seven Springs water plant. Sarah enjoyed watching cows and calves and the wild animals that wandered through her yard. After she retired, she continued to live on the ranch until her health started to fail. In July 2015, Sarah made her home at the Rock County Long Term Care. Sarah crocheted an afghan for each of her grandchildren for their graduations. She was preceded in death by her parents; her husband Howard; daughter, Marilyn and her husband, Don Frick; a granddaughter, Megan Frick; son, Jim Clay and son-in-law, Mike Clark along with her brothers and sisters. Sarah is survived by her children, Doug Clay and Mark Kane of Sacramento, California, Ed and Peggy Clay of Wiggins, Colorado, Marty Clark of Bassett, Dave and Karan Clay of Long Pine, Nebraska, Mel Clay of Arcadia, Nebraska and daughter-in-law, Sheri Clay of Springview. Sarah is also survived by 16 grandchildren, 31 great-grandchildren, a brother-in-law, Larry and Bonnie Clay of Wakefield, Nebraska along with numerous nieces, nephews and other family members. Funeral Services were held on Tuesday, July 16, 2019 at the Springview United Methodist Church with Pastors Jenice Epp and Joel Wentworth officiating at the service. Music was provided by Rick Nelson along with Scotty Nelson singing “The Old Rugged Cross.” The congregation sang “Just A Closer Walk With Thee” and “Amazing Grace.” The Dismissal CD Selection of “Jealous Of The Angels” by Donna Taggart was played. Casketbearers were: Doug, Ed. Dave, Mel and Michael Clay, Rob Clark, Mark Frick and Mark Kane. Honorary Casketbearers were: All of Sarah’s Other Grandchildren and Great-Grandchildren. Memorials were suggested to the family in her name for a future designation. Interment was in the Mt. Hope Cemetery at Springview under the direction of the Hoch Funeral Home in Ainsworth.

Sarah Esther Anson was born October 13, 1926 to William S. and Gladys A. (Carson) Anson near Orchard, Nebraska. She passed away July 10, 2019 at Rock County Long Term Care in Bassett, Nebraska at the age of 92 years and nearly 9 months. Sarah... View Obituary & Service Information

The family of Mrs. Sarah E. (Anson) Clay created this Life Tributes page to make it easy to share your memories.