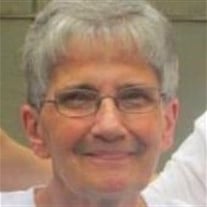 Sandra “Sandi” K. Disney “Babe”, 71, of Long Pine, Nebraska died on Sunday September 30, 2018 in her home with family close by her side. Sandi was born on January 9, 1947 in Omaha, Nebraska and married Jim “Boss” Disney in Red Cloud, Nebraska on July 6, 1985. When Sandi was young she moved to California and was raised by “Big Grandma” Nina Lanz, and she graduated from Ceres High School in 1965 and returned to the Long Pine area in 1976. In 1981 Sandi moved to Red Cloud and she worked at the Webster County Sheriff’s Office where she spent 25 years in Law Enforcement working as a dispatcher, jailer, and deputy sheriff. Sandi loved to live life passionately. She enjoyed reading, watching crime shows, and spending time with her grandchildren and her many, many friends. Sandi collected anything and everything to do with M & M’s, and was a fan of Harry Potter, Husker Football, and Nascar. Sandi enjoyed her retirement by working at the Sandhill Lounge and was notorious for giving out her world famous hugs. She was also the proud owner of a personal library and would lend her books to family and friends, (Please return any of her overdue books to the library before fines notices are sent out.) Sandi is preceded in death by her grandmother Nina Lanz, mother Wanda Klitz, and grandson Joshua Hanson. She is survived by her husband “Boss” of Long Pine; children, Brian Disney (Jane) of Hastings, Nebraska, Chris (Gigi) Meyer of Warrenton, Virginia, Tammie (Ron) Hanson of Front Royal, Virginia, Jennifer (Gary) Minnie of Twin Valley, Minnesota, James (Sherry Lewis) Disney of Johnstown, Nebraska, and Gena (Justin) Jones of Long Pine. 16 grandchildren, and one great- grandchild. Brothers, Jim (Nancy) Carley of Long Pine, and Mike (Nancy Bales)Carley of Wisner, Nebraska. Along with nieces and nephews. Funeral Services were held on October 3, 2018 at Hoch Funeral Home in Ainsworth, Nebraska with Pastor Wayne Owens officiating the service. “In The Garden and “What I Know About Heaven” was sung by Nancy Carley, other special CD selections were, “Amazing Grace” by Anne Murray, and “The Old Rugged Cross” by Alan Jackson. Casket bearers were, Keith Wright, Tom Nesbitt, Chris Christian, Garrett Weidner, Reagan Wiebelhaus, Ron Sunday, Don Copeland, and Scott Robinson. Honorary bearers were, all of Sandi’s grandchildren. Burial followed at the Grandview Cemetery at Long Pine. Hoch Funeral Home of Ainsworth was in charge of the arrangements. In lieu of flowers, memorials were suggested to the family in here name.

The family of Mrs. Sandra K. Disney created this Life Tributes page to make it easy to share your memories.