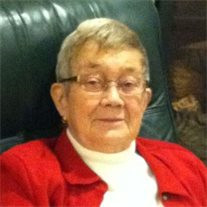 Sally Jane Mauch was born to Olga Christine (Jensen) and Charles Allan Jones in Long Pine, Nebraska, on February 16, 1933. She grew up on a horse and cattle ranch and rode a pony to a one-room grade school south of Bassett, Nebraska. She was the Salutatorian of her Rock County High School graduate class in 1950. Sally attended Colorado Women's College for two years before obtaining a BA and teaching certificate from the University of Nebraska at Lincoln in 1954. She was a member of Pi Beta Phi Sorority. Sally worked as a flight attendant for United Airlines but stopped flying to marry her high school sweetheart, Walter Emry Mauch, on October 30, 1955 upon his return from the Korean War. They were married for nearly 57 years. Sally and Emry built a home on Sunrise Terrace near Bassett, where they raised their children Mark Eliot, Teri Jo, and Shelly Lou. Their youngest son, Matthew Emry, died in infancy. Sally and Emry spent some winters in Arizona, and hunted and fished from their cabin on Fish Lake, but the place Sally loved the most was the former Mills ranch on Pine Creek south of Long Pine. As a child, she had admired the barn cupola peeking through the trees, thinking it would be a nice place to live. A cabin built on a favorite camping site there eventually became their home, and she loved to sit on the deck and look out across the creek. Sally enjoyed reading, gardening and canning, sewing, hunting and fishing, painting, and Nebraska football, but mostly spending time with her family, friends, and pets. While dedicating herself to her family, she also owned and operated an antique store in Long Pine, and she and Emry briefly raised ostriches. Her volunteer activities included leading Girl Scouts and Cub Scouts and helping to organize the 1993 Cattle Baron's Ball. She was beautiful, intelligent, patient, funny and kind, and she had spunk. She once rode a Shetland pony bareback through Charlie's grocery store to win a bet Emry had made with Charlie. She had grit and an indomitable spirit. Diagnosed with stage IV breast cancer in 1997, she fought with courage, dignity and grace until April 9, 2015, displaying her wit and humor until the end. She was preceded in death by her parents; brothers, Jack and Seth; husband Emry; and son Matthew. She is survived and missed by her brother, Allan; her children, Mark, Teri (Dave Sweeney), and Shelly; grandchildren, Jessica Allen (Kevin), Jennifer Hagen (Jeremy), Jordon Mauch, Sarah and Sam Sweeney; great-grandchildren, Darren Allen, Madison and Holton Hagen; brother-in-law, Richard (Carol) Mauch; and her dog, Sassy. She had no enemies, and was the kind of person we'd all like to be. The world is a better place for her having been here. Memorial services were held on April 14, 2015 at the United Methodist Church in Bassett with Pastor Rod Heilbrun officiating the service. CD selections of "Amazing Grace" by the Statler Brothers, "Wind Beneath My Wings" by Bette Midler, and "You Raise Me Up" by Josh Groban were provided. A special Harp selection entitled "Russian Lullaby" was performed by Sarah Sweeney. Inurnment was held at the Bassett Memorial Park Cemetery under the direction of Hoch Funeral Home of Bassett.

Sally Jane Mauch was born to Olga Christine (Jensen) and Charles Allan Jones in Long Pine, Nebraska, on February 16, 1933. She grew up on a horse and cattle ranch and rode a pony to a one-room grade school south of Bassett, Nebraska. She was... View Obituary & Service Information

The family of Mrs. Sally Jane Mauch created this Life Tributes page to make it easy to share your memories.