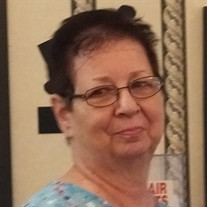 Sally Jo (Hoffman) Hanson of Long Pine, Nebraska, was born on June 3, 1948 in Bassett, Nebraska to John Hoffman and Joan (Koch), Hoffman Fredericksen, and passed away on July 16, 2018 at the Brown County Hospital in Ainsworth, Nebraska. Sally attended and later graduated from high school in Bassett, Nebraska. She met and married Richard “Chip” Hanson in 1968. They then moved to Clearfield, South Dakota and started a dairy farm. In 1980, they were blessed with their daughter Bobbi Jo. In 1990, they moved to Oregon to try new things, eventually moving back to Long Pine to be closer to family. Sally started working for Cottonwood Villa in Ainsworth, and loved her job and the people there. Sally also loved being outdoors whether she was fishing, tending to her flower garden, or just watching the birds in her yard and taking in the beauty of the day. Sally is preceded in death by her father, John Hoffman, daughter Bobbi Jo, her husband Richard, and sister, Ida Fredericksen. Survivors include her mother, Joan Fredericksen, stepfather, Donald Fredericksen, brothers, Gary (Sharon) Hoffman of Catoosa, Oklahoma, Willy Hoffman of Long Pine, John Hoffman of Cheyenne, Wyoming, and Kevin (Cheryl) Hoffman of Eagle Point, Oregon, and sister, April (Corvin) Hinrichs of Ainsworth, along with nieces and nephews. Funeral Services were heldon July 23, 2018 at Hoch Funeral Home in Ainsworth, Nebraska with Pastor Gary Graesser officiating the service. CD selections of “In The Garden” and “Old Rugged Cross” by Alan Jackson were provided. Pallbearers were Kai Atkinson, Corvin Hinrichs, Brent Deibler, Cody Chase, Mike Rowley, and Roger Magary. Burial followed at the Winner Cemetery in Winner, South Dakota. Hoch Funeral Home was in charge of the arrangements.

The family of Ms. Sally Jo Hanson created this Life Tributes page to make it easy to share your memories.