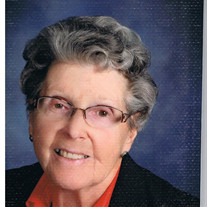 Sarah Anna (Jones) Grooms was born May 28, 1925 in Ainsworth, NE to Wilmer M. and Viola M. (Webb) Jones. Sally passed away at Rock County Long Term Care Center in Bassett, NE at the age of 94 years, 7 months and 21 days. Sally was raised in the Norden, NE area attending several country schools and graduating from Keya Paha County High School in Springview, NE in 1943. Sally greatly valued her education, knowing she wanted to be a teacher from a very early age; setting up “school” in her Grandparents yard teaching reading and sums to her dolls, teddy bear and dog Ring under the shade trees. “Home” for her was at her Grandparents on their homestead south and west of Norden in the canyons. In grade school, she boarded in Norden where her Granddad would drive the team and wagon in to pick her up on Fridays and then take her back on Sunday evenings. She loved running to the window at Mrs. Petzels where she boarded, to watch “that boy riding fast and wild out of town on his big black horse” after school. “That boy” later became her husband. During high school in Springview, her Granddad followed the same routine of dropping her off and picking her up only then it was with the Model T, weather permitting. During these years her Mother and Stepfather worked in Wichita, KS at the Boeing Airplane factory so her Grandparents had a very influential role in her life always, but especially during this time. Upon graduation from high school, with a Normal Training Certificate which was good for three years, she taught the following school term in a country school northwest of Springview and continued to teach at other country schools in Keya Paha, Cherry and Brown counties for a total of fourteen years. On May 28th, 1944, she was married to Howard Russell Grooms and continued to live in the Norden area where Russell ranched and Sally taught school. They had 55 years and 8 months of happiness until his passing in January of 2000. To this union was born a son, who died in infancy, and four daughters who she greatly adored: Rhonda (Ed) Kohel, Laurene (Gary) Munger, and twin girls Tammy (Jeff) Spies and Pam Petersen. In 1963 they adopted a son Charles. Sally was a wonderful teacher, a loving rancher’s wife, a devoted Mother, Grandmother and Great-Grandmother. She enjoyed reading, going for walks on country roads, camping and traveling, but what she treasured more than anything else was time spent with her beloved family. Sally and Russell began pitching horseshoes in 1977 traveling throughout Nebraska, the United States and Canada to many tournaments, meeting many people from all over the world who become lifelong friends. Sally was preceded in death by her grandparents, her parents, her brother who died in infancy, her husband Russell and their infant son, Howard Russell. She is survived by four daughters, one adopted son, twelve grandchildren and eighteen great-grandchildren. Grandchildren and Great-Grandchildren are as follows: Grandson Scott (Della) Kohel; Aerionna (Luke) Retzlaff, Matthew, Gabriel, Katrina and Daniel. Granddaughter Kim Kohel; Cassandra Province. Grandson Brian (Jill) Munger; Ethan, Kylin, Colton, Keely, Kortney and Shane. Granddaughter Amber (Jeremy) Grant; Justin and Dylan. Granddaughter Viola Grooms Grandson Chester Grooms Grandson Jake (Breezy) Spies; Rynnleigh. Grandsons Tye Spies and Tell Spies. Granddaughter Whitney (Bryan) Bybee; Everett and Emmett. Grandson Austin (Jamie) Petersen; Owen. Granddaughter Emmy Petersen. Memorial Services were held on Wednesday, January 22, 2020 at the United Methodist Church in Springview with Pastors Gary Munger and David Randall officiating at the services. Music was provided by Rick Nelson, with son-in-law, Ed Kohel singing “The Old Rugged Cross” The congregational hymns were: “This Is My Father’s World” and “In The Garden.” Honorary Urnbearers were: Brian Munger, Scot Kohel, Austin Petersen, Jake Spies, Tye Spies and Tell Spies. Memorials were suggested to the family in her name for a future designation. A Private Family Inurnment will be held at a later date in the Mt. Hope Cemetery at Valentine.

The family of Mrs. Sally A. (Jones) Grooms created this Life Tributes page to make it easy to share your memories.