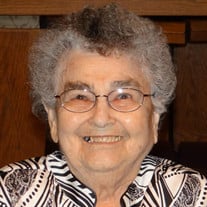 Ruth Carolyn (Galvin) Smith was born on July 5, 1927 in McLean, NE to William Matthew (Pat) and Martha (Schultz) Galvin. She passed away at the home of her daughter, Connie Rossenbach of Ainsworth, NE on April 15th, 2021 at the age of 93. Ruth grew up in the little village of McLean, and was known affectionately to all as “Ruthie”. She was particularly grateful to live next door to her maternal grandparents whom she adored. She joined two older brothers, Cliff and Don. There was bound to have been some brotherly pranks played on Ruthie, but overall, the brothers played a protective role regarding their little sister. When Paul Smith, at the age of six, moved into the neighborhood from the big town of Plainview, NE he and Ruth became best friends. In the summertime you could find them on the back of Ribbon, Paul’s pony, or playing softball with the other McLean kids on the school grounds. In the winter they exchanged these activities for sledding down Main Street or hanging out either at Ruth’s house or Paul’s. As friendship developed into courting days, roller skating and free movies became the norm. Ruth worked as a telephone operator in Randolph, NE before marrying Paul on February 19, 1950 in the McLean Methodist Church – the same church where they had been confirmed together. To this union, three children were born, David Paul in 1951, DeLila Ruth in 1954, and Connie Jean in 1960. They made their home on a rented farm southwest of McLean, later buying a farm south of Osmond, NE. In 1965 they traded the farm for a ranch south of Ainsworth, on the Calamus River. In the early 70’s, Ruth jumped on the opportunity to work as a weather observer at the Ainsworth Municipal Airport. She had always been fascinated - and sometimes a bit fearful of weather when the storm clouds rolled in - and now she would get paid to watch it! As a farm/ranch wife, Ruth enjoyed cooking and baking. Visitors that stopped in seldom got out the door before having a homemade cinnamon roll or a big piece of chocolate cake. Ruth’s favorite meal revolved around fried chicken, and she made the best. She had an affinity for sweets and looked forward to trips to the sale barn so she could have a piece of someone else’s homemade pie. Ruth also enjoyed riding along with Paul in his straight truck, during his trucking days. In her later years on the ranch, she enjoyed tooling about in her golf cart and checking for wildlife along the river. When Ruth moved to the Cottonwood Villa assisted living facility in 2014, she enjoyed conversing with the staff and residents and partaking in various activities. She was especially fond of “Bingo” and “Nail Day.” Ruth loved her children, grandchildren, and great-grandchildren and was especially enamored with the babies. Even in her last days, it brought a smile to her face when any of her family would enter the room or call on the phone. Ruth was preceded in death by her loving husband, Paul; parents, William Matthew and Martha (Schultz) Galvin, and siblings, Clifford and Donald Galvin. Left to mourn her passing, her children, David Smith and wife Sharon of Rapid City, SD, DeLila Lumbardy and husband Stan of Spearfish, SD, and Connie Rossenbach and husband John of Ainsworth, along with ten grandchildren and numerous great-grandchildren. Her family cherishes the many loving memories of a special lady with a delightful, heartfelt laugh that brought smiles to all she encountered. Funeral Services were held on Wednesday, April 21, 2021 at the United Methodist Church in Ainsworth with Pastor David Randall officiating at the service. Music was provided by Joe McBride, “I’ll Fly Away” and “When We All Get To Heaven”. Ruth’s Great-Grandchildren sang “Jesus Loves Me.” Interment followed in the Ainsworth Cemetery. Casket Bearers were: Kevin Rossenbach, Taylor Rossenbach, Wilbur Juett, Jake Morris, Daniel Chrisp and Brian Smith. Honorary Casket Bears were: David Smith, Tom Smith, Caleb Chrisp, Amy Juett, Chandra Morris and Dusty Smith. Memorials were suggested to the family in Ruth's name for future designation.

Ruth Carolyn (Galvin) Smith was born on July 5, 1927 in McLean, NE to William Matthew (Pat) and Martha (Schultz) Galvin. She passed away at the home of her daughter, Connie Rossenbach of Ainsworth, NE on April 15th, 2021 at the age of 93. Ruth... View Obituary & Service Information

The family of Ruth C. (Galvin) Smith created this Life Tributes page to make it easy to share your memories.