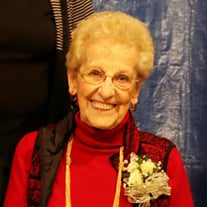 Ruth Edna Day was born March 15, 1926 to Harold and Ruby (Heeb) Day in Springview, Nebraska. She passed away at the Sandhills Care Center, in Ainsworth, Nebraska, on Wednesday, July 29, 2020 at the age of 94. The Day family moved from Brown County when she was a sophomore. Ruth started school in Johnstown, Nebraska where she met an obnoxious junior who got her attention by dragging her dress sashes in the mud. Thus, began the life-long love between Kenneth and Ruth. They were true soul mates for over 72 years of marriage, often seen holding hands, even when they both lived at the care center. While Kenneth was at war, Ruth taught school in rural Ainsworth. In 1944 she took a train to California to visit Kenneth who was in basic training. Ruth married Kenneth after his service on November 17, 1946, in a dress of parachute silk that her mother had sewn. They started their life together at the ranch south of Johnstown. To this union five children were born: Corby, Cindy, Doug, Becky and Tod. Family was the most important thing to Ruth. They were blessed with 10 grandchildren: Ronna, Dane, JD, Kendy, Colby, Jeremy, Scott, Pat, Branden, Alyx and 21 great-grandchildren. Ruth made baby quilts for her grandchildren and great grandchildren for as long as she was able. Ruth loved when her family got together. Her smile lit up when visited by her grandchildren and great-grandchildren, especially when they entertained her with their music. She would serve lunches every Tuesday at noon for all her grandchildren (and their friends). Ruth and Kenneth took all their grandchildren to South Dakota skiing several times. As a couple they traveled extensively. Ruth was a proud Sandhill’s rancher’s wife, helping on the ranch providing meals. She was a wonderful cook and had many family dinners at home. She was especially known for her chocolate chip cookies, her cinnamon rolls, and chocolate scotcheroos. Ruth also enjoyed helping irrigate, running parts and raising their five children. She was active with the Johnstown and Ainsworth United Methodist Churches, Cowbells, Veteran’s Auxiliary, Brownie leader, Cub Scout leader and saw all five kids through swimming lessons, piano lessons, and 4-H activities. She helped organize an annual Johnstown High School Alumni banquet. She is preceded in death by her husband, Kenneth, her parents, an infant brother and infant sister, her mother and father in-law, her brother-in-law Marvin Lake and wife Bunny, sister-in-law Velma Williams and husband Roy, son-in-law Mike McNally, daughter-in-law Jan O’Hare, and great-grandson Oliver Lee. She is survived by her sons Corby, Doug and wife Linda, Tod and wife Sue; daughters Cindy and Becky; 10 grandchildren and 20 great-grandchildren, along with nieces, nephews and many other family and friends. At the age of 94 she lived a full and complete life. Graveside Services were held on Friday, August 7, 2020 at the Ainsworth Cemetery. Pastor David Randall officiated at the service. Ruth’s Grandchildren sang “You Are My Sunshine” and “Save the Last Dance.” Casketbearers were: Ronna Fritz, Dane Sears, JD O’Hare, Kendy Heskett, Colby O’Hare, Jeremy O’Hare, Scott O’Hare, Patrick O’Hare, Branden O’Hare and Alyx O’Hare. Visitation music was provided by Sherry Campbell and Mariyln Williams. Memorials are to be made to the family in Ruth’s name to be designated later. Arrangements were under the direction of the Hoch Funeral Home of Ainsworth and online condolences may be left for the family at www.hochfuneralhome.com.

Ruth Edna Day was born March 15, 1926 to Harold and Ruby (Heeb) Day in Springview, Nebraska. She passed away at the Sandhills Care Center, in Ainsworth, Nebraska, on Wednesday, July 29, 2020 at the age of 94. The Day family moved from Brown... View Obituary & Service Information

The family of Ruth E. (Day) O'Hare created this Life Tributes page to make it easy to share your memories.