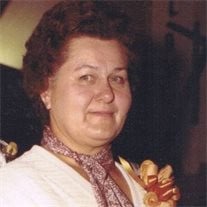 Ruth Elaine was born September 27, 1934 Pishelville, NE to James and Wilhemina (Elis) Nachtman. Ruth was the oldest of two children. Ruth graduated from Stuart High School in 1953. After graduation Ruth moved to Lincoln working as a bookkeeper. March 28, 1954 Ruth married Donald Fox in O'Neill, Nebraska and into this union five children were born. Ruth was a bookkeeper for many years. Around 1967 Ruth started working at the Rock County Hospital as a Candy Stripe Nurse which she enjoyed and later when the empty nest arrived went back to college to get her LPN degree and continue working in field for a number of years. Additional jobs Ruth took on were driving activities school buses for Myers School Bus Service, delivering rural mail, and tending to horse chores. There is even a time that she coordinated helping her children with three or four early morning paper routes all at one time. Ruth loved horses and growing up worked with them to do many tricks. We can all tell you about her horse Patsy, the big horse that would bow down at Ruth's command. There was even a young colt Buster, she taught to lay down. One year she was in the Denver parade square dancing horseback. Ruth loved to help move cows to pasture, leisure rides, anything on horseback. One particular ride she really enjoyed was on a big ole horse called the "Colonel" in the late 80's up the beautiful government canyon by Valentine. She'd have taken that ride home in heartbeat. He was smooth. Ruth entered eternal life in the night of December 29, 2015. She is preceded in death by husband Don; son Kevin; parents, James and Wilhemina, and a brother Sonny. Ruth is survived by sons; Tim, Tony and wife Corkie all of Bassett; daughters, Donna Billings and husband David of Valentine, Nebraska, and Brenda Magary and husband Roger of Ainsworth. Grandchildren include, Blake Fox and wife Elsa of Georgetown, Texas, Kirby Fox and wife Laura of Concordia, Kansas, Cole Fox of Hastings, Nebraska, Tyson Billings of Lincoln, Nebraska, Beau Billings of Omaha, Nebraska, James Fox and wife Cristina of Fort Lupton, Colorado, Gina Fox of Reno, Nevada, Travis Magary of Ainsworth, Nebraska and Kyle Magary and wife Camie of Bassett, Nebraska. Great-Grandchildren include, Onyx and Aria Fox, Chase and Melanie Fox, Tyler and Makayla Fox, Blaine Fox, Savannah Fox-Arango and Skyler Fox-Arango, Will Sisson, Carson & Cooper Magary. Graveside service for Ruth E. Fox was held at the Bassett Memorial Park Cemetery on January 2, 2016. Pastor Steve Matthews officiated the service. Casket bearers were Tyson Billings, Beau Billings, Travis Magary, Kyle Magary, Blake Fox, Kirby Fox, Cole Fox, James Fox and Gina Fox. In lieu of flowers/memorials were suggested to Rock County Hospital Foundation. Hoch Funeral Home of Bassett was in charge of the arrangements.

The family of Mrs. Ruth E. (Nachtman) Fox created this Life Tributes page to make it easy to share your memories.